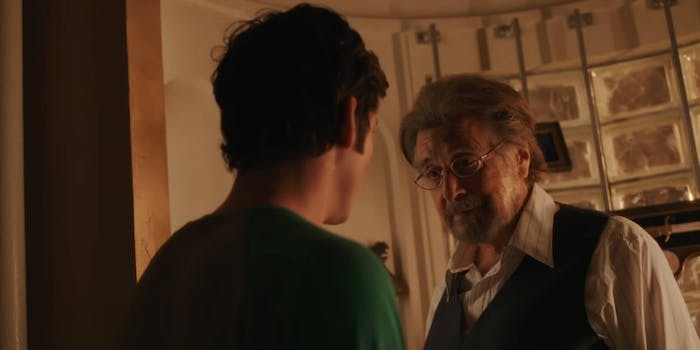 The Amazon series is being criticized for a made-up scene. Its creator says it serves a purpose.

The Amazon drama Hunters, about a team of Nazi hunters in 1977 New York City, led by Al Pacino’s Meyer Offerman, is inspired by a true story. But it’s being called out for one fictionalized scene that went too far.

The Auschwitz Memorial, which preserves the site and history of the former concentration camp in Poland, tweeted its objection to one scene from the series, in which Auschwitz guards play a game of “human chess,” stating it’s “not only dangerous foolishness & caricature. It also welcomes future deniers.”

While the Amazon series definitely has a certain style—the Daily Dot’s Anna Maria Ward commented that the “Eerie undertones of horror paired with Tarantino-esque gore and gauche pop culture references result in a stylistic but bloated final product”—the tweet sparked a debate about censorship and artistic license.

It also once again brought up the issue of Nazi and anti-Semitic propaganda for sale on Amazon. In a statement to The Guardian, an Amazon spokesperson said: “As a bookseller, we are mindful of book censorship throughout history, and we do not take this lightly. We believe that providing access to written speech is important, including books that some may find objectionable.”

In December, Amazon was criticized for selling holiday ornaments featuring photos from Auschwitz.

Series creator David Weil has since issued a statement about the chess scene, saying: “Why did I feel this scene was important to script and place in series? To most powerfully counteract the revisionist narrative that whitewashes Nazi perpetration, by showcasing the most extreme—and representationally truthful—sadism and violence that the Nazis perpetrated against the Jews and other victims. And why did I feel the need to create a fictional event when there were so many real horrors that existed? After all, it is true that Nazis perpetrated widespread and extreme acts of sadism and torture—and even incidents of cruel ‘games’—against their victims. I simply did not want to depict those specific, real acts of trauma.”