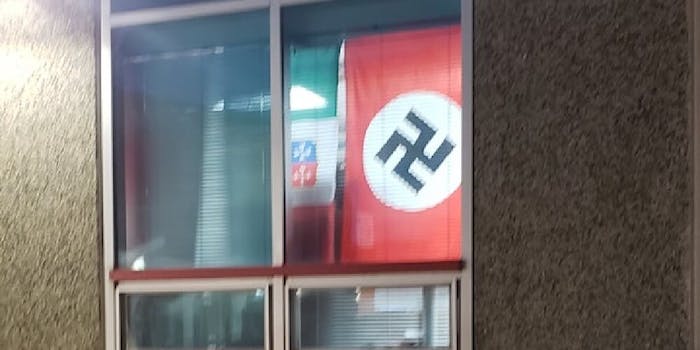 The flag was displayed as part of a World War II lesson.

A Maryland high school is investigating after a woman posted a photo online showing a Nazi flag hanging from a classroom window over the weekend, according to multiple reports.

Facebook user Nicole Hopkins on Friday shared the photo showing the red flag with a Swastika hanging from the window at Governor Thomas Johnson High School.

“I just want to know what class at Governor Thomas Johnson High School has this hanging in the window,” she wrote on Facebook.

It was later revealed that the flag was hanging in a history class. Hopkins added an edited note to her Facebook post: “Yes. I’m aware this is probably a history class. Yes I know the significance behind teaching it.. my issue is it being in a window for the whole world to see. There’s several other flags hanging in the class that could swap places with this IF it needed to be on display.”

The flag was reportedly seen during a basketball game over the weekend, according to NBC. Hopkins did not immediately respond to the Daily Dot’s request for comments.

The Frederick County Public Schools Superintendent Theresa R. Alban said in a statement to Fox5 that the district will “take appropriate action” regarding the issue.

“The flag was removed as soon as our administrators were made aware. An apology was sent to the community,” she said. “This does not reflect the values of our school system.”

“FCPS sincerely apologizes to our community for this incident as we share your feelings regarding the hatred and intolerance message this flag represents,” she further wrote.

According to multiple reports, the flag was hung up as part of a World War II history lesson. But many people didn’t buy it.

“History class or not what need do they have to hang the Fn flag and in the window no less???” wrote one person on Facebook, sharing Hopkins’ photo.

“WHO TF HAS A FULL SIZE NAZI FLAG JUST READY?! It’s not like you can run up to Walmart and grab one from the seasonal aisle,” another person commented on Hopkins’ photo.

While some tried to argue the “educational” value of hanging the flag, Hopkins said in follow-up comments that there are other ways of going about the lesson.

“The school sits on a main road near downtown and literally everyone driving by can see it. Hang it up if you must but not in a window,” she wrote in response to a user who said she was being “sensitive” about the issue.

Governor Thomas Johnson High School did not immediately respond to the Daily Dot’s request for comment.