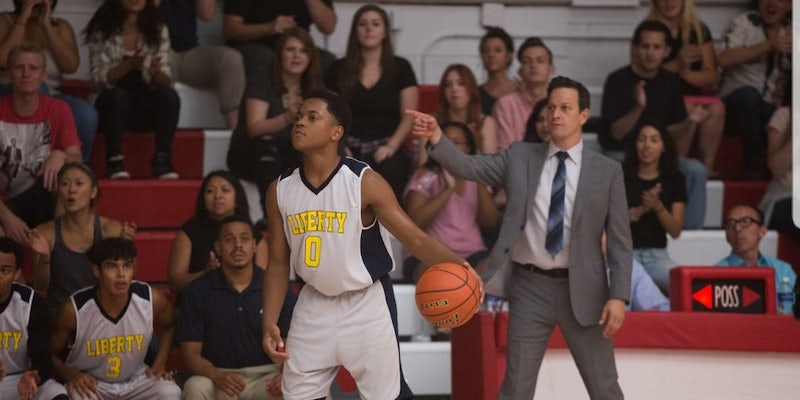 ‘Amateur’ gets boxed out by cliches

In exploring the seedy industry of American basketball, the Netflix film becomes 'Blue Chips' for the age of viral dunks.

Writer-director Ryan Koo’s Amateur is a Blue Chips for the Instagram generation. It follows a basketball prodigy, Terron (played by Michael Rainey Jr.), as he navigates the seedy world of amateur hoops. Adapted from Koo’s short film of the same name, Amateur at times feels like it could be a mentor-mentee story. Other times it’s a cautionary tale about kids manipulated by the people and systems meant to protect them. Then it’s a rags-to-riches-to-rags-back-to-riches story. Amateur is all of these things at once, but in the end, it’s not really any of these things. Amateur packs a lot into its 96-minute runtime, and very little of it is successful. There is enough material here to cover a season of a TV show.

Condensing the story takes the air out of the ball and renders the movie flat. What’s left feels like a jumble of story threads that don’t cohere.

The movie starts with Terron stuck on a middle school team going nowhere when his dad hooks him up with Coach Gaines (Josh Charles). Coach Gaines woos Terron and his mom, Nia (Sharon Leal), with promises of a yellow brick road full of scholarship offers, elite college programs, and a trip to the NBA at the end of it all. Before you can say “layup” Terron is balling at a prep school against older players. He gets a new phone, barely going to class, and ticks off most of the pampered athlete clichés.

Amateur moves fast enough that it doesn’t get tedious, but it’s uninspired. It takes easy stances, like suggesting players should get paid, and offers easier answers. For as generic as most of the drama is, the movie comes to life in the third act when the script goes off the rails. Terron, who has a growing online presence despite being fairly dull, makes an inexplicably dumb mistake while livestreaming. The film’s final 15 minutes are a testament having and eating your own cake. I don’t want to give too much away, but I was not expecting to see an approximation of the ending to Step Up 2: The Streets, and it was genuinely thrilling.

There isn’t much that can be done with a movie that is DOA like Amateur. It doesn’t have an original idea in its bones and it’s repetitive. Nearly every game scene features a tight shot of Terron dribbling, then bursting into action as a hip-hop track starts and the slo-mo kicks in. If any player were as predictable as Amateur, they would get their shot sent into the stands mercilessly. That’s pretty much how I felt watching Amateur. It’s inoffensive, but you’re better off hooping at another court.