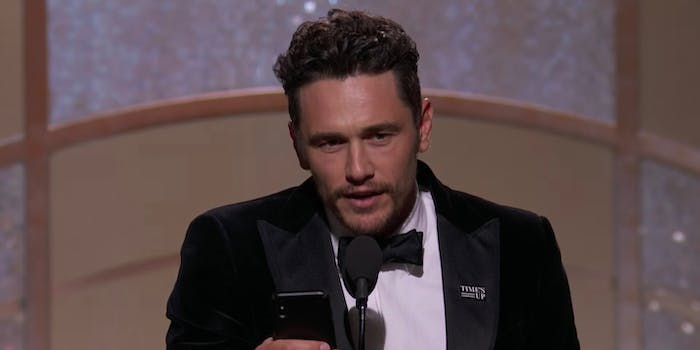 Several women speak out against James Franco during the Golden Globes

'Please never ever ask me why I left the film/tv business.'

James Franco accepted the Golden Globe for Best Actor, Comedy or Musical on Sunday in one of the more memorable moments of the night, with Tommy Wiseau by his side. But it’s not a moment that sat well with everyone, including an actress who once worked with him.

In a series of now-deleted tweets, Breakfast Club actress Ally Sheedy referred to Franco by name several times while she tweeted about the Golden Globes. She wanted to know why Franco, who was nominated for an award, was allowed into the ceremony and drew her followers’ attention to the fact that Franco sat at a table with Christian Slater, who was nominated for Mr. Robot and has been previously convicted on assault charges and arrested for sexual harassment. (The charges in the latter case were later dropped.)

“James Franco just won,” she wrote. “Please never ever ask me why I left the film/tv business.”

Though Sheedy eventually removed those tweets, some of her most recent likes on Twitter are in reference to praise she received for calling Franco out.

Sheedy, who Franco directed in the off-Broadway play The Long Shrift, didn’t elaborate or refer to any specific incidents involving Franco, but some believe that Sheedy’s grievances with Franco might be personal.

In 2014, Franco admitted to hitting on a 17-year-old girl on Instagram when he was 35, which he described as being “embarrassing.”

In the wake of Franco’s win, other women have come forward to call Franco out for his past actions, which included actress Sarah Tither-Kaplan revealing that Franco told her that nudity she had done in movies of his “wasn’t exploitive” and another woman who said that Franco exposed himself to her and propositioned another 17-year-old.

Franco was among the many actors who wore #TimesUp pins to the Golden Globes.