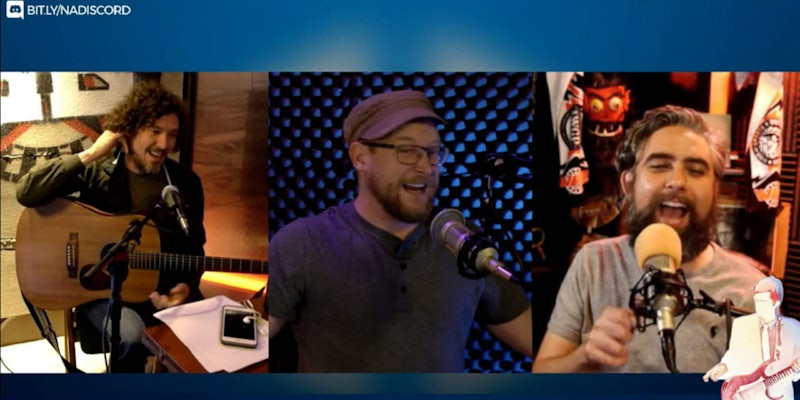 The surprise hit tops the charts.

Just a day after its Jan. 22 release, Night Attack’s All’s Well: A Night Attack Album reached the meteoric heights of No. 1 comedy album on iTunes and No. 3 in top albums. It’s unusual for a comedy album to break into the mainstream charts, so when it does, you know it’s damn funny.

Night Attack, comprised of the comedy duo of Justin Young and Brian Brushwood, has been operating since 2011 when they release of their self-titled debut. For All’s Well, the Night Attack team took a somewhat different approach, looking for “something wonderful to make the fifth album about, something positive,” Brian Brushwood told the Daily Dot.

The inspiration came from collaborator and superfan Steven Cogswell, an ambitious musician who had already been making songs based on highlights from Night Attack’s podcast for years now. When the pair realized something bigger could be made with Cogswell’s help, All’s Well quickly came into being. Brushwood and Young had hopes for the album to reach No. 1 within the genre of comedy albums as their previous efforts had before. But they never thought they would make such a splash in the overall category, passing the likes of Future and Lady Gaga in popularity.

Immediately following the release of the album, Brushwood and Young’s Twitter feeds became logs for how the album was performing with the duo’s enthusiasm exponentially increasing at the passing of every new milestone. “What a joy that our amazement translates,” Young said.

My body is numb. https://t.co/bbtFafFFxi

In all of itunes. Full stop. All categories.

If you got $1.99 to spare and want to be part of pure magic, now’s a very good time to decide to jump in and be part of something very silly and very special. pic.twitter.com/EaxyZ9n1bB

The achievement was so monumental in part due to the do-it-yourself nature of the album. There was no algorithm-based or influencer centric promotion for the release, they say. “Seeing the power of individual podcast communities coming together and Voltron up to get us here has been amazing,” said Brushwood about the support they’ve received from other fandoms and friends.

“We do everything in house, and all we had was our community and the community of podcasts we’re friends with. This truly felt like such a win,” Young added.

Man… the coolest part about today is watching all the other “niche” podcast/YT communities support for All’s Well! You guys are making it happen!

No support from the machine. No promo from the tastemakers. Just you guys!

All’s Well: A Night Attack Album is currently available on iTunes, Amazon, and for streaming on Spotify.