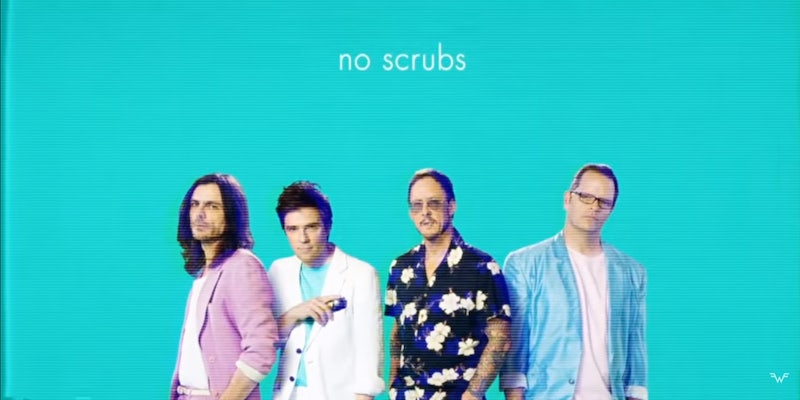 Weezer just covered ‘No Scrubs,’ and we don’t know how to feel about it

Weezer is bringing back the ’80s with the release of an eponymous covers album that just washed ashore.

The band suddenly released its 13th album at midnight Thursday morning, to the shock and delight of fans. The album, unofficially dubbed “the Teal Album,” contains 10 tracks of pure nostalgia, covering everything from Toto’s “Africa” to the Turtle’s “Happy Together.”

It was the inclusion of TLC’s “No Scrubs,” however, that grabbed the attention of people all over the internet.

THIS IS A PSA: WEEZER JUST RELEASED A NEW ALBUM THATS ALL COVERS AND THEY COVER NO SCRUBS: https://t.co/XO6WbJrCss

Unsurprisingly, the entire album serves as a genuine and intriguing homage to the original tracks. Weezer brings its brand of sugary and introspective rock to the table, but the band stays true to the source material each time. Except for the whole cultural appropriation issue that comes with four white guys covering a proudly Black song made by three Black icons of R&B and hip-hop.

Many people are delighted by the cover of the 1999 hit.

I never thought I needed @Weezer’s take on No Scrubs, but I did. Thanks. @RiversCuomo & Co. pic.twitter.com/Jh7JFTCX1E

weezer’s cover of no scrubs. that’s it. that’s the tweet.

The album’s only been out for seven hours, but internet users far and wide can’t stop talking about it. “Hello, yes, I am Generation X and I will take several helpings of Weezer covering ‘No Scrubs’ please and thank you,” Twitter user @dimsie wrote.

More recently than I should probably admit, I drunkenly sang 'No Scrubs' to my husband over and over until I fell asleep, so. I am into this.

so weezer’s no scrubs cover…. pic.twitter.com/cEZMV63BJw

Despite the overall enthusiasm for the unexpected cover, there were those that didn’t approve. “No Scrubs. Weezer are covering No Scrubs,” Twitter user @raejohnston wrote. “I am more upset about this than I have any right to be.”

No Scrubs. Weezer are covering No Scrubs.

I'm more upset about this than I have any right to be.

She wasn’t the only one. User @hayrr agreed. “Weezer covering no scrubs is extremely 2009 energy. lads, leave it in the 20th century,” they wrote. “Everyone listening to it to save us from doing so is braver than the marines.”

everyone listening to it to save us from doing so is braver than the marines.

No Scrubs is the only one that doesn't fit. The rest is like a playlist for Uncle Steve's 55th birthday bash. Anyways, Weezer is clearly targeting the Boomer-Gen-X cusp crowd. But cudos for mixing it up with British & US, no AC/DC or INXS tho. pic.twitter.com/zQlI1prgN5

No matter what everyone else says, you’ll have to hear it for yourself to decide—the album is now streaming on Spotify.

Careful though, you might end up liking one of Weezer‘s covers more than the original.