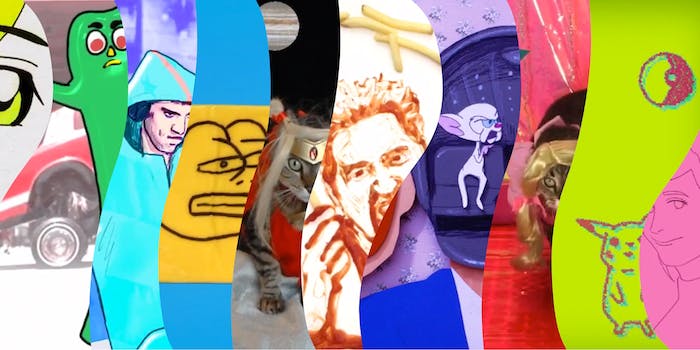 Scroll through Alicia Herber’s Vine account and you’re slowly drawn into a shiny candy shell of ’90s cartoons, cats in hats, and cereal art. There are ferret mosh pits, cayenne Kanyes, and Judge Judys made of Fire Sauce.

It’s a delicious universe, one the 29-year-old Austin, Texas, artist has been building since joining Vine in 2013. Her stop-motion vines tell a story in six seconds, and she often leaves the edges rough. We sometimes see her hands in the finished product, willing her creations to life—pushing them into the frame.

As we sit and sip beers at a South Austin bar, Herber, who has a day job in animation, relates that she likes the tactile aspect of stop motion.

“I feel like it’s almost like a puzzle that you’re trying to figure out,” she says. “You have all these pieces and you’re trying to mimic a human quality by slowly moving things around, like a meditative experience. … I understand gravity and the weight of things when it’s tactile and not an imaginary thing that lives on your computer.”

Her first viral hit was a Nyan Cat vine, which was filmed in her living room: Those are Herber’s hands elevating her very patient tabby, Dora. Her cats feature quite a bit in her videos, but she says Dora in particular is really into dressing up. The clip has more than 9 million loops.

Her early Vine work was more a “diary of things.” She would improvise to get the right shot, like taping her phone to a ruler. Herber then moved on to stop-motion art using ketchup. It just “seemed natural.”

“I’ve always sort of drawn with my food,” she says. “And I love to paint with watercolors. And so ketchup is awesome because it’s transparent but can also be opaque. It’s like a watercolor with a medium in it.”

Herber’s clips get millions of views, and she’s become an identifiable name on the platform. There’s been a noticeable exodus of top creators in the last year, and Herber thinks many of those fleeing are comedians who need more than six seconds and find platforms like YouTube more lucrative or ideal. But for her, six seconds is still doable, and those half dozen seconds sometimes take three or four days to create.

Herber’s vines mirror hyper-shareable internet pop culture, and that’s drawn the interest of social-savvy brands like Coca-Cola, Target, and Wimbledon, though she says she wants to do more work with one of her favorite mediums: food.

“I try to only take jobs with brands or companies that I like,” she says.

She says the most divisive clip she’s published supported Bernie Sanders, and it prompted personal messages that were “coming from a totally abstract place,” containing original greetings like “I hope you die.”

She recently posted her Trump piece.

Her instantly shareable art has produced another issue: Herber says a lot of people have lifted her content and used it without credit, something that’s widespread and, in the most public example, put a spotlight on middling internet personality Josh Ostrovsky last year. Other aggregators or accounts have allegedly gone as far as putting their own watermark on her vines, something she says happens once or twice a week. Those aggregators could then be monetizing her work, and the original creator is lost in the shuffle. If she contests it, she says, it becomes even more difficult and getting a lawyer is a costly obstacle.

“I feel like there should be some sort of etiquette,” she says. “‘Can I post this? Is it OK?’ …It’s an easy solution to give someone credit.”

She recently partnered with Nickelodeon, which feels like a perfect fit. Herber is “pretty obsessed” with the ‘90s and loves animation like The Simpsons, Sailor Moon, and Adventure Time. I ask about more contemporary shows like BoJack Horseman; she doesn’t connect with its sad themes as much. Herber also has a soft spot for Disney—her grandfather worked as a background artist and assisted on The Jungle Book.

When it debuted, Vine quickly became a space where teen boys headlined the Popular Now page but not necessarily for producing creative or engaging content. Stars like Carter Reynolds and Nash Grier were called out for inappropriate behavior, and Vine’s youth culture and formulaic delivery has reached the point of parody.

But Herber’s work reflects a different side of the platform. She joins creators like Anne Horel, Hayatto, and hazelst in pushing boundaries and expanding what animation can be—artists who are sketching out a place where a new kind of culture can flourish, and they can push their creations into the frame.