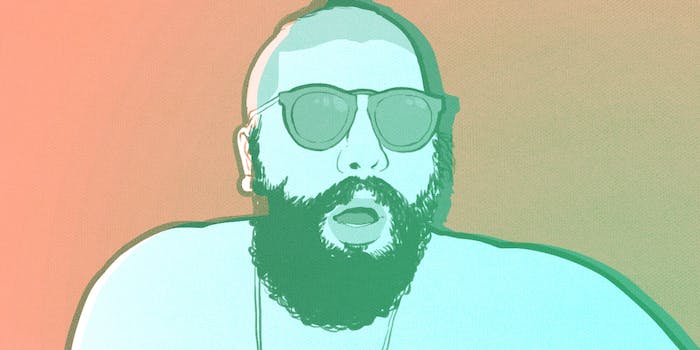 We talked to people the Fat Jew stole from

Since Josh Ostrovsky, better known at the Fat Jew, signed with the talent agency CAA, the Internet has been buzzing—or rather, screaming—with fury.

The main issue is that Ostrovsky seldom credits the comedians whose material he screenshots—at times it appears he intentionally crops out their usernames—and he can make thousands of dollars per post. When comedians request that he credit them, he does—albeit half-heartedly. For example, he wrongly identified BuzzFeed’s Ben Rosen’s Instagram handle in a now-deleted post. He has also been accused of setting up a dummy Twitter account, so he can further evade responsibility in terms of crediting comedians.

Twitter user Kevin Kelly put together this list of Ostrovsky’s stolen memes with links to the original posters. He told me that as of 5pm Monday, his post has gotten over 112,000 hits.

While Ostrovsky’s publicist said her client did not have any comment on the issue of joke theft, she did direct me to a Tech Insider article that quotes an anonymous comedian who uses the pseudonym Jake. He is a rather grateful victim of Ostrovsky’s joke theft. Jake says:

“When you see your image, or your joke, being ripped off…it’s a mix of validation and anger. I was like, ‘great, my stuff is funny because all of these people are liking it on this guy’s page.’ At the same time, none of those people know that joke is mine.”…Then one night several months ago, Ostrovsky had finally tagged Jake’s handle in one of his jokes Ostrovsky posted to his account.”

After Ostrovsky stole several more of Jake’s jokes, he finally tagged him in a post. “‘I got 7,000 followers in 2 minutes,’ Jake remembers. ‘It was great for me, and great for my career.’”

Jake, however, is an anomaly. I interviewed two comedians from whom the Fat Jew has stolen jokes: Ben Rosen, standup comedian and senior creative at BuzzFeed, and Patrick Walsh, writer for It’s Always Sunny in Philadelphia and Two Broke Girls. (Editor’s note: These email interviews have been edited slightly for length and clarity.)

How did you find out the Fat Jew stole your joke?

Ben Rosen: My roommate sent me a text message when he saw it. My first reaction was “how the hell did he find that?” It wasn’t on Reddit or anything. I had just tweeted it about 24 hours before he stole it. I was very upset that he took the time to crop out my Twitter handle. It shows that it’s not like he’s forgetting to credit, he’s actively trying to hide it.

Patrick Walsh: I was eating lunch with some friends and a buddy of mine said “Check out this Instagram the Fat Jewish did, isn’t this funny?” I looked at it and it was my Instagram! My name, handle, and photo had been removed, and it was posted as Fat Jew’s post. There was no credit of any kind and he didn’t even add an additional comment to it. It wasn’t like when someone usually steals a joke where they change the wording to “make it their own,” it was just… my post. I saw it had thousands of “likes” on it, way way way WAY more than it got when I posted it. At the time he had half a million followers; now it’s nearly 6 million. I was angry. I hadn’t heard of the guy, so I texted an Internet-savvy friend and she said “oh yeah, he’s been doing this for years.” I tweeted “Don’t follow this guy, he’s a blatant joke thief,” linked to the two Instagrams as obvious proof, and tagged him in it. He responded, probably only because he saw I had a lot of Twitter followers, and said, “It was on a blog, dude. Apologies.”

Why is it important to you to call the Fat Jew out on this?

Rosen: It’s amazing to me how many people defend this guy just because they want all their funny jokes in one, easy-to-find location. They don’t care if he steals and they don’t care if it’s credited, and that’s a big problem. Think about what that’s doing to the community. If it’s acceptable for him to steal jokes, why would anyone want to follow comedians at all? No one comedian could ever equal the output of every comedian on the Internet. The Fat Jewish has all the choice cuts. That means less attention for the people who write your favorite shows and star in your favorite comedies. We should be trying to make it easier for the funny people to get noticed, not praise someone who intentionally hides them.

Walsh: I think it’s important to call him out so that it stops, not just with him but across the board. Everyone’s focusing on Fat Jew, but a LOT of people do this, and it sucks. I recently had a really popular tweet that I saw on dozens of Instagram and Twitter accounts, all with a ton of followers, all without credit (including BuzzFeed by the way, who should really know better). If people see that stealing material leads to a huge increase in followers, TV deals, book deals, and lots and lots of money, they’re going to keep doing it. And then what? I’m working hard and writing jokes for the Fat Jew and his ilk now? No thanks. They all say the same “I saw it online, sorry” crap, but the fact is that, in most cases, it takes 10 seconds to Google a joke and find out where it originated. They’re not doing it because OF COURSE they want people to think they wrote the funny joke. It happens constantly.

What can you do to stop this, aside from tweeting about it and blocking him?

Walsh: Tweeting about it and telling people is all I’ve done, to be honest, because how much time do I really want to devote to this loser? I tweeted about it a year ago and nobody cared. Now it’s a much bigger thing and that’s great. That’s all you really can do. I’m not going to sue him because I’m not going to waste the time and money and energy. Hopefully someone does.