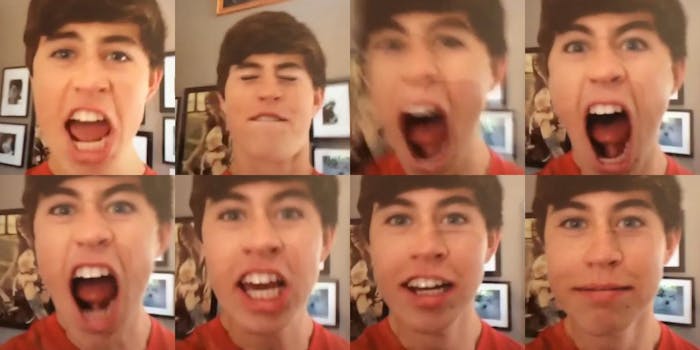 Grier apologized, but did he learn anything?

Nash Grier is a 16-year-old Vine star who currently has 8.7 million followers on the app. He recently got a movie deal with fellow Vine sensation Cameron Dallas. He’s hanging out with Justin Bieber.

In his spare time, he makes jokes about AIDS being caused by “fags.”

This Vine clip apparently appeared back in April, and in it Grier makes a joke about an HIV public service announcement, screaming the word “Fag” as the punchline. Grier has since deleted the Vine, but popular YouTuber Tyler Oakley posted the clip on Sunday, and called him out:

Call me and people like me, ‘fag’ all you want, but spreading false information about deadly diseases is next level. https://t.co/W6X9MUrgUK

Grier’s image is one of wholesome, handsome boy next door. Many of his vines include his little sister, and he often posts references to the Bible on Twitter. Back in April, New York magazine published a profile titled, “Nash Grier: The Jesus-Loving Vine Star.” An excerpt:

“Nash, who is from North Carolina, is a God-fearing Christian who frequently consults his iPhone’s Bible app while on the road. “I don’t use cuss words, I try not to do anything awful. You don’t want to lower your audience,” he says. He shares that Jesus-camp vibe with dozens of other social-media luminaries. A recent Nash video bore the caption “Y’all twerk more than you pray these days #HolyBible #GasPedal.”

But a few people brought up his old tweets:

nash apologized for his homophobic tweets but he also said that it was some kid who tweeted it pic.twitter.com/MMlUAT1CJp

This isn’t the first time Grier has said something ill-advised on the Internet. Last December, he enraged both fans and critics when he posted a video to YouTube in which he, Dallas, and JC Caylen gave advice to girls on how to be more attractive. A majority of Grier’s fanbase is teenage girls. Often, those girls defend his actions—and that’s a problem.

At this point, supporting nash grier and supporting the gay community are mutually exclusive. You CAN call out your idol’s behaviour.

This seems to be a troubling trend with Vine stars who are currently getting movie, TV, and brand-endorsement deals. Scroll through the account of Brittany Furlan, who was recently in hot water after joking about rape with an actor on the red carpet during the Daytime Emmys, and you’ll find quite a few questionable clips. In fact, scroll through the “popular now” page, and you’ll find a lot of racist and sexist material, much of it from teens.

Vine can be an important place for exploring identity, but it can also be a platform for perpetuating racist and sexist stereotypes, misogyny, and hate speech. Ironically, Grier posted a video yesterday in which he and Dallas address the “hate comments” addressed at him:

Combined on Twitter, Vine, and YouTube, Grier speaks to more than 14 million fans. When he’s spewing garbage like this to young people, that’s a dangerous thing. When you’re a 16-year-old Internet star, the things you say carry weight.