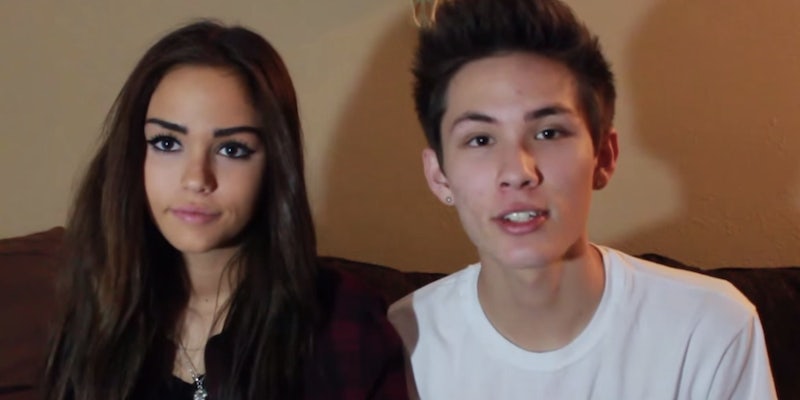 The MagCon star trended on Twitter for all the wrong reasons.

The video is filmed from Reynolds’ point of view, with his pants pulled down and  his erect penis exposed.  His ex-girlfriend, Instagram celeb Maggie Lindemann, tells him “I don’t think I can” and repeatedly stresses “I am really uncomfortable.” Reynolds tells her to “do it,” and “just pretend (the camera) isn’t there.” Lindemann eventually curls up and stops looking at the camera. It ends with Reynolds saying, “Oh my gosh, Maggie.”

READ MORE: Carter Reynolds’ apology for his leaked video is rape culture at its worst

The duo has had a tumultuous relationship, with several breakups, the most recent of which was in May. Lindemann is 16 years old, and Reynolds recently turned 19, leaving issues of consent and statutory rape on the table depending when and where the clip was filmed, as well as child pornography issues depending on how old Reynolds is in the video. (For those reasons, we’ve chosen not to link to it here.)

Apparently @carterreynolds is having trouble mentally grasping the definition of the words "no" and thats honestly not surprising at all.

are you gonna do meet & greets in jail? @carterreynolds

.@carterreynolds you need to flat out tell your young female followers what you did was disgusting and wrong. don't make excuses.

Reynolds is far from the first social media star in trouble over sexual misconduct. Last year, YouTuber Sam Pepper came under fire for prank videos where he assaulted unsuspecting women, and several other YouTube stars have been accused of pressuring fans into sexual situations by using their fame.

I'm going to explain everything but I want to talk to everyone involved first.I want to make sure u know the full story about what happened.

Update 10:38am CT: Carter Reynolds released a statement via Twitter in which he called the whole thing a “HUGE misunderstanding” and said “Couples do stuff like that all the time.”

Update 12:31pm CT: Reynolds amended his apology in a series of tweets. He also claimed that the inappropriate direct messages he sent to fans were done by a hacker who breached his account.

I never wanted this to happen. My iCloud account was hacked, and I am doing whatever I can to make sure that everything quickly resolved.

I never wanted this to happen. My iCloud account was hacked, and I am doing whatever I can to make sure that everything quickly resolved.

I'm sorry that the girl, her family, my family and everyone else have been affected by the video.

I am embarrassed and extremely upset that my fans, followers, and everyone have been exposed to this private video.

Even though the girl and I were dating at the time, I should not have talked in the way or manner I did in the video. It was disrespectful.

I should never have filmed any of it. It was disrespectful, and degrading for both of us. Her and I are still friends, and I care about her.

Update 10:45am, July 20: As fallout from the nude leak continues, Reynolds turned to livestreaming platform YouNow to vent about his frustrations with Lindemann and allege sexual misconduct between her and fellow Vine star Hayes Grier. He turned to Twitter shortly thereafter and began making references to suicide.

i never had any thoughts of killing myself until now. & no it's not bc of maggie. it's bc of all the unnecessary hate i get. i'm sick of it.

Lindemann, for her part, reminded her 300,000 followers that suicide isn’t something to be taken lightly.

The dumbest of the dumb

Update 6:08pm, July 24: Reynolds was reportedly removed from VidCon, the annual YouTube conference, Friday afternoon. He once more took to Twitter to vent his frustrations with the festival organizers.

i'm not gonna be treated with disrespect for no reason

good luck kicking me out

too bad i'm staying at the hotel. yikes.