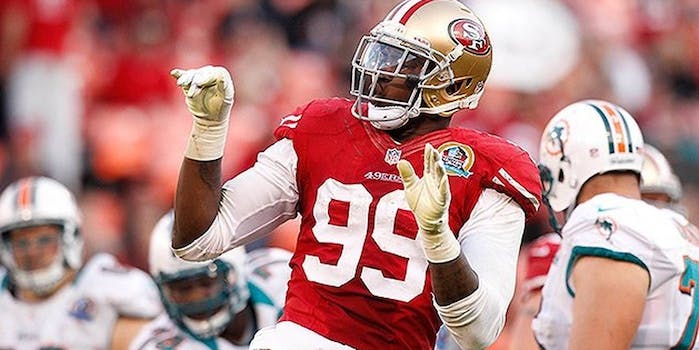 Did NFL star Aldon Smith Periscope himself getting high?

The NFL will investigate.

Linebacker Aldon Smith, once considered one of the finest young players in the NFL, is sitting out a year-long suspension from the league after multiple violations of the substance abuse policy.

In order to get back into the league this year, Smith, who became a star with the 49ers but is now with the Oakland Raiders, will have to prove to commissioner Roger Goodell that he’s matured from being the player who has been suspended multiple times in his career (for substance abuse problems and because he’s been arrested at least five times since 2012).

But Smith might not want to show Goodell the following video, which reportedly shows Smith and a woman using Periscope to stream themselves smoking marijuana, as first reported by CSN Bay Area. Since he hasn’t been preparing for Oakland’s preseason training camp, CSN has noted that he’s been active on Periscope with an account named “ravenga” and has been seen in some of the archived videos on that account.

One of those videos—there are 31 in all—is titled “Fire up session,” and though Smith never appears, it sounds like Smith’s voice talking about smoking weed and why it’s OK for him to be doing so, despite the fact it’s against the NFL’s rules.

On Monday, ESPN reported the NFL would investigate the video, only three months after the first round of the draft was marred by the release of a video featuring first-round pick Laremy Tunsil wearing a gas mask and smoking marijuana.

But Smith took to Twitter on Monday and said he’s an innocent man.

Not surprisingly, not everybody was swayed by Smith’s plea.

What matters, though, is whether the NFL buys Smith’s story. Because if the league can prove that Smith is actually in the video, that might spell the end of his career.