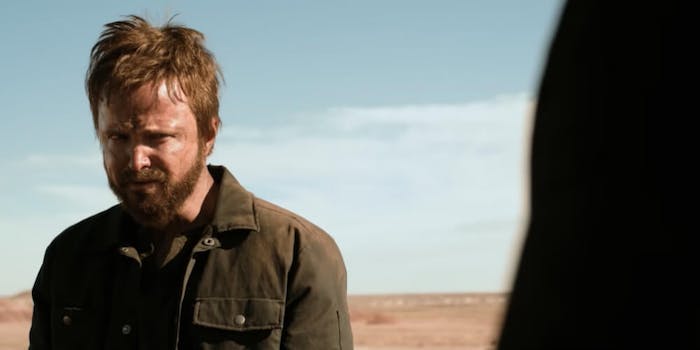 Paul was conducting an AMA when asked about his character's post-'Breaking Bad' fate.

It’s been about a week since El Camino: A Breaking Bad Movie debuted, giving at least 8 million viewers closure to Jesse Pinkman’s story. Yet Aaron Paul, the actor who portrays Pinkman, predicted what that closure would look like three years ago on Reddit.

The official Netflix U.K. and Ireland Twitter account pointed to Paul’s three-year-old Reddit post on Friday. Paul was conducting an “Ask Me Anything” (AMA) after Breaking Bad’s five-year run came to an end in 2013.

Paul said that he’d like to think Pinkman kept driving and got away after we saw him leaving the scene of Walter White’s (Bryan Cranston) death in the series finale.

“They’re gonna be searching high and low for Jesse, so I don’t know,” Paul said at the time. “I like to think he was building something in Alaska…but he could be locked away in a prison somewhere. But we don’t like to think about that version of the show. So, I think he’s living happy on a lake somewhere in Alaska, fishing a lot, making things out of wood, probably kicked the habit of meth.”

This is what @aaronpaul_8 said during a Reddit AMA *three years ago* when asked where he thought Jesse Pinkman ended up after Breaking Bad: pic.twitter.com/VajbGlcnOL

We now know 2016 Paul pretty much summed up Pinkman’s fate on El Camino: A Breaking Bad Movie. Maybe showrunner Vince Gilligan saw Paul’s post and decided to run with it.