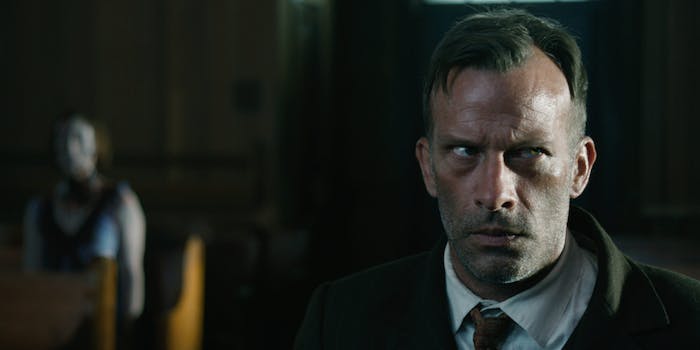 The Stephen King adaptation is a Midwestern take on 'The Shining.'

In 1922, Wilfred James killed his wife. And then the rats came.

Zak Hilditch’s film adaption of the Stephen King novella, pulled from 2010 collection Full Dark, No Stars, is the latest in a revolving door of King revisions this year, but it might be the simplest. Thomas Jane is Wilfred James, a lean, leathered farmer who inhabits a speck of Nebraska farmland circa 1922 with his wife Arlette (Molly Parker) and teenage son Henry (Dylan Schmid). Wilfred is all narrowed eyes and stubborn pride, a hungry dog trying to protect his scraps, and his marbled Midwest cadence is certainly memorable. (When the film debuted at Fantastic Fest last month, Jane explained that he had to learn a period-specific Nebraskan accent. He was also barefoot.)

The viewer knows right away that Wilfred has committed a terrible crime, but we also see the murder in brutal detail, when perhaps a little restraint might have worked better. And there’s dialogue that hints at what’s coming: “There’s another man inside every man,” Wilfred drawls, “a stranger.”

That line could sum up most of King’s work, but it provides a parallel to Gerald’s Game, Netflix’s other recent adaptation. Director Mike Flanagan actually improved on the source material, but 1922 is a little trickier. Hilditch stays with the story’s narrative (for the most part) and magical realism, and gets the mood down with a score from Mike Patton, but we don’t have any real sense of who these people are, or what life was like before. Did Wilfred already have murderous tendencies? How did he and Arlette meet?

The narrative is told from Wilfred’s point of view so Arlette and Henry are rendered as one-sided characters (and Wilfred might be an unreliable narrator), which leaves the film a little thin. Arlette’s demise comes because she wanted a better life in the city and some personal identity. After the Fantastic Fest screening Parker explained that she “didn’t want to play her like she ought to be murdered,” and she’s successful in giving her agency at a time when that wasn’t widely accepted for women. But 1922 hinges on a King specialty: men losing their minds in isolation.

And so Wilfred’s guilt becomes a literal infestation. In the hands of a lesser actor, he could have become a caricature, but Jane stains him, revealing his toxic masculinity and vulnerability. The only misstep here is that 1922 feels like it was steamrolled to fit a feature-length movie time, and the last third starts to lag, especially when we see the conclusion creeping up from a mile away.