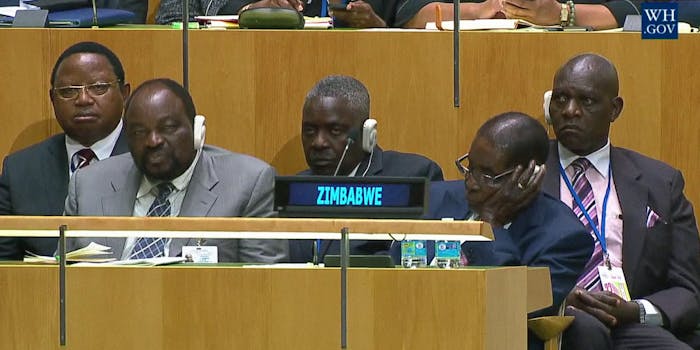 Everyone loves the Zimbabwe delegation’s reaction to Trump’s U.N. speech

On Tuesday, President Donald Trump gave his first speech to the United Nations General Assembly. During the speech, the president used the term “Rocket Man” to refer to Kim Jong-un and said the U.S. “will have no choice but to totally destroy North Korea” if the country uses nuclear weapons. Towards the end of his speech, he called for nations to come together. “We need to defeat the enemies of humanity and unlock the potential of life itself,” Trump said.

The leaders from around the world who had gathered in New York didn’t seem that impressed with the president’s words. Sure, it’s easy to capture people looking bored and sleepy at any early-morning speech. But a lot of the delegates had the glazed-over look in their eyes that is usually associated with trying to tune out someone’s words. Others looked incredulous.

I feel you Zimbabwe. #UNGA pic.twitter.com/GvlTAA3fxa

The photo says it all. One man is wisely using the time to get in a short nap. Another man seems to be holding in laughter. No one here is responding favorably to the president’s words.

Look at how Zimbabwe is looking at Trump, bro….. just look pic.twitter.com/dH5RY9gfwQ

The reactions from Zimbabwe delegates occurred during a part in Trump’s speech where he discussed the U.S. bearing an “unfair cost burden.”

The United States is one out of 193 countries in the United Nations, and yet we pay 22 percent of the entire budget and more. In fact, we pay far more than anybody realizes. The United States bears an unfair cost burden, but to be fair, if it could actually accomplish all of its stated goals, especially the goal of peace, this investment would easily be well worth it.

Now that is squad goals.