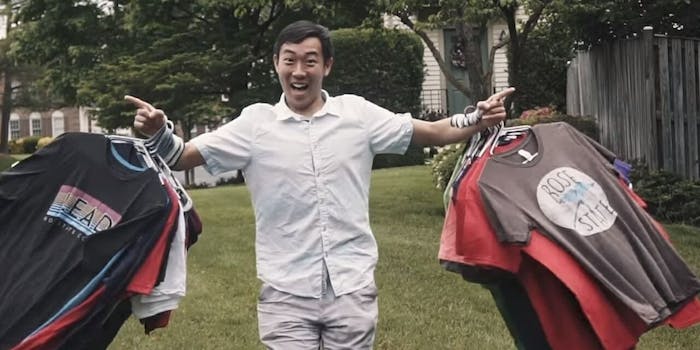 All he needed was a good idea. And a little bit of code.

Think back for a second, if you dare, to your senior year of high school. A mixture of excitement and dread mingled as you prepared to enter an exciting new chapter of your life, the only thing standing between you and your future being college admissions.

Teenaged YouTuber Zhaomaster (real name: Aaron Zhao) just endured that soul-sucking process, and he decided that even if he didn’t get into his dream school, he was going to walk away with something for free—from nearly every college in the country.

In between agonizing over his application essays and studying for his SATs, Zhao stumbled upon a blog post in which its author bragged about receiving hundreds of free college T-shirts simply by asking the colleges for them. Feeling inspired, Zhaomaster decided to attempt the same thing with every university in the United States.

First, Zhao gathered the email addresses from every American college and placed them in an Excel spreadsheet. Then, he wrote a simple code that would send a pre-written email to each college asking for a free shirt.

The results seemed bleak at first. Zhao received a lot of spam mail and a few rebuffs from women-only colleges. (His code couldn’t rule out specific colleges.) But soon, the packages began rolling in at a ridiculous pace. The hopeful college student came home every day to find his P.O. box filled to the brim with free swag, from T-shirts to pizza cutters to decorative wall flags.

Considering the retail price of college shirts at their gift shops, Zhao probably received more than a year’s tuition in free shirts. He could sell them and make some decent money for his freshman year, or he could donate them to a local charity. Either way, he has a great story to tell admissions officers.