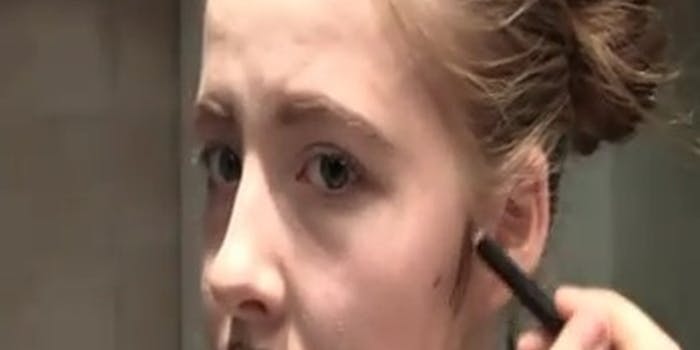 You can learn a lot of things from YouTube’s massive library of tutorials, even how to look like the opposite sex. YouTube, a site laden with ego and personal branding, is no stranger to identity experimentation, and viewers flock to tutorials of males turning into females and vice versa. Here are a few of the Daily Dot’s favorites:

1) Genderbender2010’s transformation from a brown-haired boy to a pretty blonde has been viewed 3.7 million times in a year. “I don’t know why, but I found this﻿ really moving,”  wrote carlablub on the 7 minute video done to the tune of Gary Go’s “Wonderful.”

2) “I am the man,” declares ActingitoutMakeup in her less than four minute video tutorial which includes a fake mustache. The 18 year old Norwegian cheekily applies concealer and realistic stubble to the tune of Mulan’s “I’ll make a man out of you.”

4) Promise Tamang Phan, aka Dope2111, jokes her new years resolution for 2012 is to do less female-to-male tutorials “so my husband doesn’t leave me.” Besides a great Michael Jackson, and a Lil Wayne, Phan also does an amazing Drake, which has been viewed 2 million times in six months.