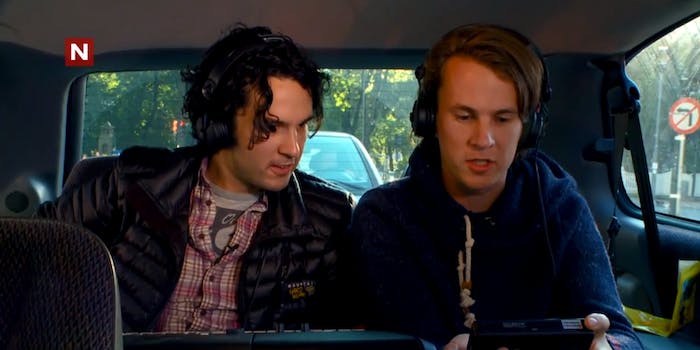 Ylvis hijacks the radio and freaks out unsuspecting cab riders

Those looking for a more personalized radio experience probably didn’t have something like this in mind.

Those looking for a more personalized radio experience probably didn’t have something like this in mind.

Ylvis, the group behind “What Does the Fox Say” and “Massachusetts,” are more than just singers. They once made getting trapped in an IKEA your worst nightmare brought to life. Now they’re creeping out unsuspecting victims during one of life’s more mundane activities: a taxi ride.

In their newest video (complete with English subtitles under “Captions”), Bård and Vegard Ylvisåker follow a taxi car in Oslo as it picks up people and takes them where they need to go.

However, the duo has taken control of the radio and GPS so that the lyrics and directions turn into their own personal narrated soundtrack in both English and Norwegian.

While the riders are understandably confused, most of them seem to be taking it in good stride. It’ll never catch on in reality, but at least for one day they heard something different on the radio.