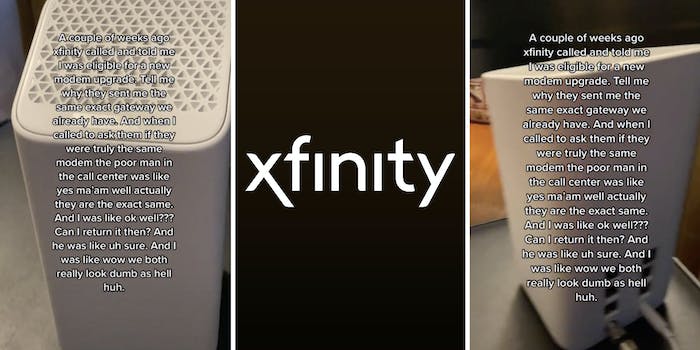 ‘I really think they punk’d me’: Xfinity offers customer upgrade, sends them the same exact modem

'That's what I get for wanting faster internet I guess.'

Internet service providers aren’t exactly the most beloved companies by consumers, and there are numerous reasons why. A now-viral post by TikToker Janice McCoy highlights a series of customer-vs-ISP struggles in a video where she received a modem “upgrade” offer from Xfinity—only to receive the same exact modem.

McCoy writes in a text overlay on the viral TikTok video: “A couple of weeks ago Xfinity called and told me I was eligible for a new modem upgrade. Tell me why they sent me the same exact gateway we already have. And when I called to ask them if they were truly the same modem the poor man in the call center was like ma’am well yes actually they are the exact same. And I was like ok well??? Can I return it then? And he was like uh sure. And I was like wow we both look really dumb as hell huh.”

@janicemakesamess I really think they punked me. That’s what I get for wanting faster internet I guess #somebodyoncetoldmetheworldisgonnarollme #iaintthesharpesttoolintheshed #xfinitywifi #whatishappening #tragic #heynowyouranallstar ♬ original sound – There I Ruined It

The creator added in the caption, “I really think they (punk’d) me. That’s what I get for wanting faster internet I guess.”

With over 270,000 views, the video led may TikTok users to share several of their own complaints with Xfinity.

When an ISP effectively has a monopoly over a specific area by being the only major high-speed carrier in the region, they usually jack up the prices well above regions that have competing businesses, as one user noted in the comments.

“Xfinity cuts out at my parents FL house every 10-15 minutes and won’t let any other service providers into the area they live in… such a trash company,” they wrote.

Then there’s promotional pricing: for some reason providers love to punish return customers by continually raising the prices of their service, but will offer more affordable rates for brand-new customers. This forces returning consumers who aren’t looking to disrupt their internet service to hop on the phone or chat window once a year while being left on hold for extended periods of time. And this is all to continue to pay the same exact price for the same exact service they’ve been experiencing beforehand.

However, one viewer, who recently signed up with the provider, claimed that Xfinity still attempted to upcharge them. “I just signed up for xfinity and they offered the modem for free. Tell me why when I clicked ‘I have my own’ my bill went down $10 😵‍💫,” they said.

Several viewers in the comments claimed that Xfinity’s expensive upgrades with few improvements in service led them to find new providers. “We switched from them because they kept telling us we’re getting an upgrade to the best plan (for more $) every year,” one user said.

Oftentimes ISPs will also try to charge customers higher prices for “faster” internet speeds, but there are many who state that these “boost” plans are ultimately a waste of money. In short, many providers charge customers more money for the same service, but they aren’t actually giving you an internet speed boost that’ll make a marked difference in your gaming, web browsing, or downloading capabilities.

Similarly, many experts claim that it more cost effective to own your own modem and router in the long-term. They also note that the quality of the routers ISPs give their customers aren’t always the best; you likely won’t get the most bang for your buck when it comes to speeds and WiFi range, not to mention instances of strange timeouts that seemingly occur without reason.

Comcast, which owns Xfinity, has been found guilty of lying to its customers about the true cost of its service plans in the past. Ars Technica reported in 2020 that the company “agreed to issue refunds to 15,600 customers and cancel the debts of another 16,000 people to settle allegations that the cable company lied to customers in order to hide the true cost of service.” The report notes that Comcast had to pay $1.3 million in refunds.

The Verge also reported that in both 2010 and 2014 Comcast earned the dishonor of being named Consumerist‘s”Worst Company in America.” Which is quite the feat when you consider that I, Frankenstein came out in one of those years; the production company who put that together must’ve had to have been in the conversation for that dubious honor.

The Daily Dot reached out to Xfinity via email for comment.