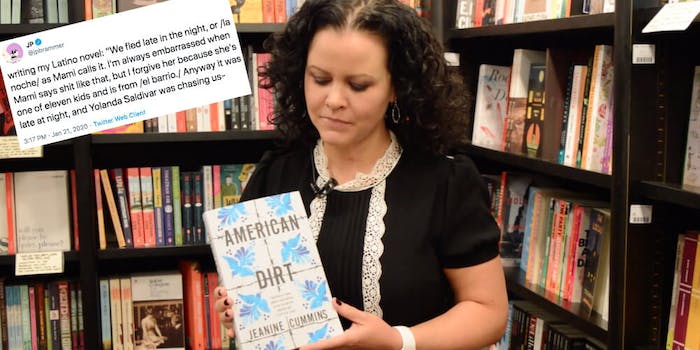 From cutting books in half to President Snow being announced as the protagonist in the Hunger Games prequel, literature Twitter has had quite a week.

Jeanine Cummins’ controversial novel American Dirt, which follows the story of a mother and her son fleeing from Mexico to the U.S., was released on Tuesday. It landed the coveted honor of being an Oprah Winfrey book club pick, and celebrities, from Gina Rodriguez and Yalitza Aparicio to Stephen King, have been seen promoting it on social media. American Dirt is supposed to be about the Mexican migrant experience. Yet, it’s written by an author who identifies as white and stands accused of perpetuating stereotypes about Mexicans.

“I am white. The grandmother I shared with Julie and Robin was Puerto Rican, and their father is half Lebanese. But in every practical way, my family is mostly white. I’ll never know the impotent rage of being profiled, or encounter institutionalized hurdles to success because of my skin or hair or name,” Cummins said in a 2015 New York Times essay.

When speaking to Shelf Awareness about American Dirt in 2019, Cummins said she identifies as Latinx.

Chicana writer Myriam Gurba first opened up the polarizing discussion surrounding American Dirt with her review on it. In the review, Gurba delves into Cummins’ identity, the way the book leans on stereotypes to portray Mexicans, and how Cummins took from other books written by actual Latinx authors.

Twitter users were inspired by the controversy and are now creating their own parody narratives. The meme begins with the phrase “writing my Latino novel” and then proceeds to call out stereotypes through their respective parody narrative.

“Writing my Latino novel: ‘We fled late in the night, or /la noche/ as Mami calls it. I’m always embarrassed when Mami says shit like that, but I forgive her because she’s one of eleven kids and is from /el barrio./ Anyway it was late at night, and Yolanda Saldivar was chasing us-” Chicano writer John Paul Brammer tweeted.

writing my Latino novel: "We fled late in the night, or /la noche/ as Mami calls it. I'm always embarrassed when Mami says shit like that, but I forgive her because she's one of eleven kids and is from /el barrio./ Anyway it was late at night, and Yolanda Saldivar was chasing us-

Most–if not all–of the Twitter users partaking in the meme are part of the Latinx community.

“Writing my Latino novel: How Mexican am I? My dad was a taco; my mother a piñata. I was born on Cinco de Mayo, Mexico’s most holy day. When I was 4, I was being trained to run drugs for the cartel but I knew I wanted to be a dancer. So, I started my trip to the US,” Latina comedian Cristela Alonzo tweeted.

How Mexican am I? My dad was a taco; my mother a piñata. I was born on Cinco de Mayo, Mexico's most holy day. When I was 4, I was being trained to run drugs for the cartel but I knew I wanted to be a dancer. So, I started my trip to the US.

writing my latino novel: Hey ~mamacita~, my neighbor Jesus calls as I sway down the street with my Mexican hips, which, like Shakira's, tell no ~mentiras~, Latin passion in my blood burning with ~el fuego~ of desire like a spicy jalapeño.

Writing my Latino novel: "I let the gringo unwrap me like a banana leaf. He resembles the conquistador who asked my ancestors the way east then stole their land. I let him plunder, spread my piernas like mayonesa. "Dame tu leche," he demands. He milks me, my language, mi lengua. https://t.co/q466bV0cl0

Writing my Latino novel: My mother rubs vix on every surface of the house. ¡Empanada! I am 16 & already have a full ride scholarship to Princeton because immigrants: We get the job done. My abuela was undocumented but then got citizenship THE RIGHT WAY. ¡She se puede! https://t.co/JX4VhFkODd

I joined The Los Locos gang when I was a fetus. Later that day I sold heroin Chiclets at the border. My mother Frida Kahlo was a hitman for the cartels. Our home was a pyramid. I've never seen the beach. The Virgin of Guadalupe stole my lowrider. Again.

Writing my Latino novel: "I bidi bidi bom bom'd to la tienda for Bustelo y fresh coconut. Papi walked out on us when I was a kid; he took mami's records, our money, and our Spanish. Mami doesn't speak Spanish anymore, and I'm going to be pressed about it for 240 pages." https://t.co/0NhxpkKvCS

L.A. Times contributor Yolanda Machado, who partook in the meme, told the L.A. Times that the meme exemplifies how “non-Latinos write about our stories” and “frame us.”

Machado then directed her comments at Cummins.

“Our community is making fun of you because you don’t understand who we are,” Machado told the newspaper. “Look at how we can sum up the stereotypes you inflict on us with just one tweet.”

Writing my Latino novel: “Pero now, I had to choose. Get jumped into the gang or join my mami cleaning rich white peoples houses. I couldn't tell her I had a baby to think about, to protect. Then I heard the yelling, "LA MIGRA!!" and I got my chanclas, and ran. ” https://t.co/7yTOmfmxl6