Is this actually the worst webcomic ever published?

Many people are saying that this webcomic is bad.

The internet is a wonderful, democratic marketplace of ideas, and one of the ideas is a comic about how American women are garbage because they don’t sleep with the managers at their minimum-wage service jobs.

Or something. The point of the story isn’t entirely clear because, as comedy writer Josh Fruhlinger pointed out, this may be “the worst cartoon ever, literally, in the world.”

oh god i found the worst cartoon ever, literally, in the world https://t.co/A8FzIpQatL

His analysis is a little hyperbolic, considering that neo-Nazi propaganda comics like “Billy the Heretic” exist, but the Bad Comic is indeed very bad. And it’s being mocked accordingly by Weird Twitter. 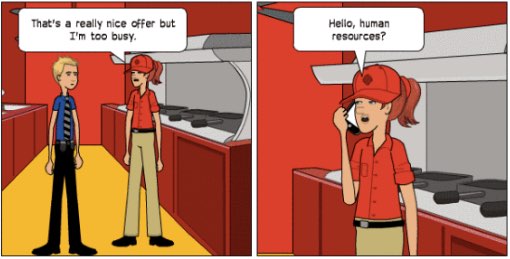 “Take This Job and Shove It” was created by “Relampago Furioso” (“angry flash of lightning” is a pseudonym for cool dudes only) and published on the website “The New Modern Man,” which promises “the truth about women and the world.” This website is so Red Pill that it contains a section explaining “The Real World Matrix.”

The plot of the comic goes something like: Our Hero, the Restaurant Manager, asks his employee Becky to see New Hit Film. She reports him to HR for inappropriate behavior, causing him to be suspended from his job.

Bitches, man! Always complaining about men using uneven power dynamics to get dates in the workplace. It’s so unfair!

And then we find out that Becky isn’t just a bitch, she’s also the worst kind of woman you can be in Red Pill World—a slut! She’s into threesomes, but won’t have sex with Our Hero. If you’ve taken the Red Pill, this appears to you as intolerable hypocrisy.

To most, though, it only adds to the comic’s ridiculous unrealism.

Wow, but it gets worse. Now it’s time for a little intersectional Red-Pilling, combining gender stereotypes with racial stereotypes. This is a pretty advanced technique in Being Awful on the Internet, but Lightning McAngry pulls it off.

Now Manager Hero, disheartened by being rejected and suspended—by a female HR person no less, because those bitches always stick together—decides to fly to Asia to escape America’s bad culture of female empowerment.

In Red Pill world, Phnom Penh is a fantasy land where pretty women think dudes who are fresh off the plane and still wearing their restaurant manager clothes are Handsome. The Manager-Hero’s body literally sparkles with white dude magic as he gets off the plane.

See, unlike American women, Asian women respect a Restaurant Boss when they see one, and are Sweet to him. So now we’ve got the Submissive Asian Woman stereotype happening, too. This comic could not be a better self-parody of the pickup artist community if it tried.

Meanwhile, American women just want to hulk out and destroy men. This is easily the best and most relatable panel in the comic:

The story ends with Our Manager kissing his new girlfriend, who sees past his wack haircut to the Powerful Boss inside. He makes an international phone call to tell the restaurant they can shove that manager job. Apparently, he will remain in Cambodia, unemployed but appreciated for who he is (a white guy).

Everything about the Bad Comic is bad in such a pitch-perfect way. It’s consistent in its tone (resentful!) and about as philosophically consistent as you can be when your philosophy is Women are Terrible but I Desperately Hunger for Their Approval.

And there are more comics where the Bad Comic came from. The internet jokesters have truly stumbled upon a treasure trove for their Friday.

Where were you when a comic finally told The Truth about Women and the World?