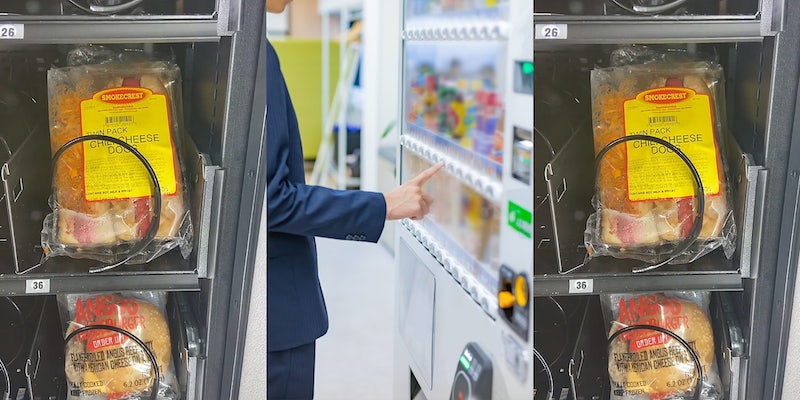 ‘One bite and my body would shut down’: Workplace vending machine draws criticism for containing twin chili dog pack

TikToker Chrissy (@thelapofluxury) shared the video on Tuesday showing the double chili dog pack in a vending machine at her workplace.

“You’d have to be 100% savage to be at work to get a twin chili cheese dog pack out of the vending machine and eat it,” she says in the clip.

♬ Love You So – The King Khan & BBQ Show

The video had reached over 1.6 million views by Thursday, with commenters criticizing Chrissy’s workplace’s food safety standards. Several pointed out that a label on an Angus burger in the vending machine says, “Keep frozen.”

“That ish will have your stomach making washing machine sounds,” one person said.

“‘One bite and my body would shut down,” one user lamented.

In a response video, Chrissy clarifies that the vending machine is “refrigerated.”

“I don’t think it’s frozen, but it is refrigerated,” Chrissy says. “So it is safe for consumption. However, I don’t think you should eat it at work.”

The Daily Dot reached out to Chrissy via TikTok comment.