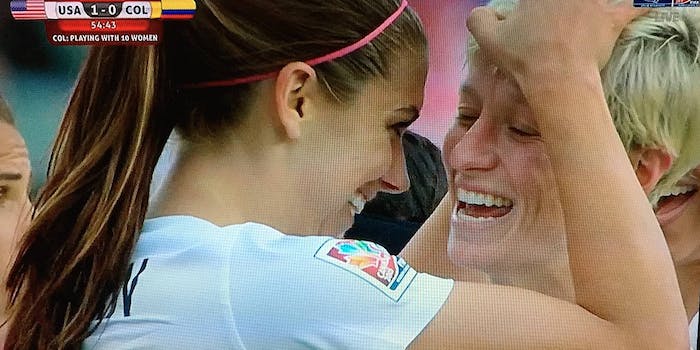 Thank Alex Morgan for that.

It’ll be a rematch of the iconic 1999 final when the United States meets China at the quarterfinals of the Women’s World Cup on Friday. This after a closer-than-the-scoreboard-reads 2-0 result against Colombia to advance.

With the U.S. women’s national team expected to blast through Colombia in the Round of 16 to advance to the Women’s World Cup quarterfinals—some would say it was the biggest mismatch of this round—the Americans got the game-opening goal early in the second half when Alex Morgan ricocheted a shot past Colombian backup goalkeeper Stefany Castano.

For much of the game, Colombia played equally with the Americans, but just after halftime, Colombian starting goalkeeper Catalina Perez was sent off with a red card after tripping Morgan on a breakaway chance at the top of the goal box. But Abby Wambach, taking the shot with her left foot, missed the penalty kick, shooting it wide left.

Morgan, though, did this a few minutes later, blasting the ball off Castano’s hands.

About 15 minutes later, the Americans were awarded another penalty kick, and this time, Carli Lloyd easily managed the goal for the 2-0 lead in the 65th  minute.

Colombia, though, wasn’t supposed to be the Americans’ patsy. The 28th-ranked team in the world beat No. 3 France in group play, and Colombia appeared confident before its match with the U.S., ranked No. 2 in the world.

“They belittle us. They think we’re a team they’re going to walk all over and it will be an easy game for them,” Colombian star Lady Andrade said in an interview with USA Today. “We’re going to beat them since they like to talk so much.”

Andrade, though, has in the past let her hands do the talking. Just ask longtime American star Abby Wambach, who took this punch from Andrade in the 2012 Olympics