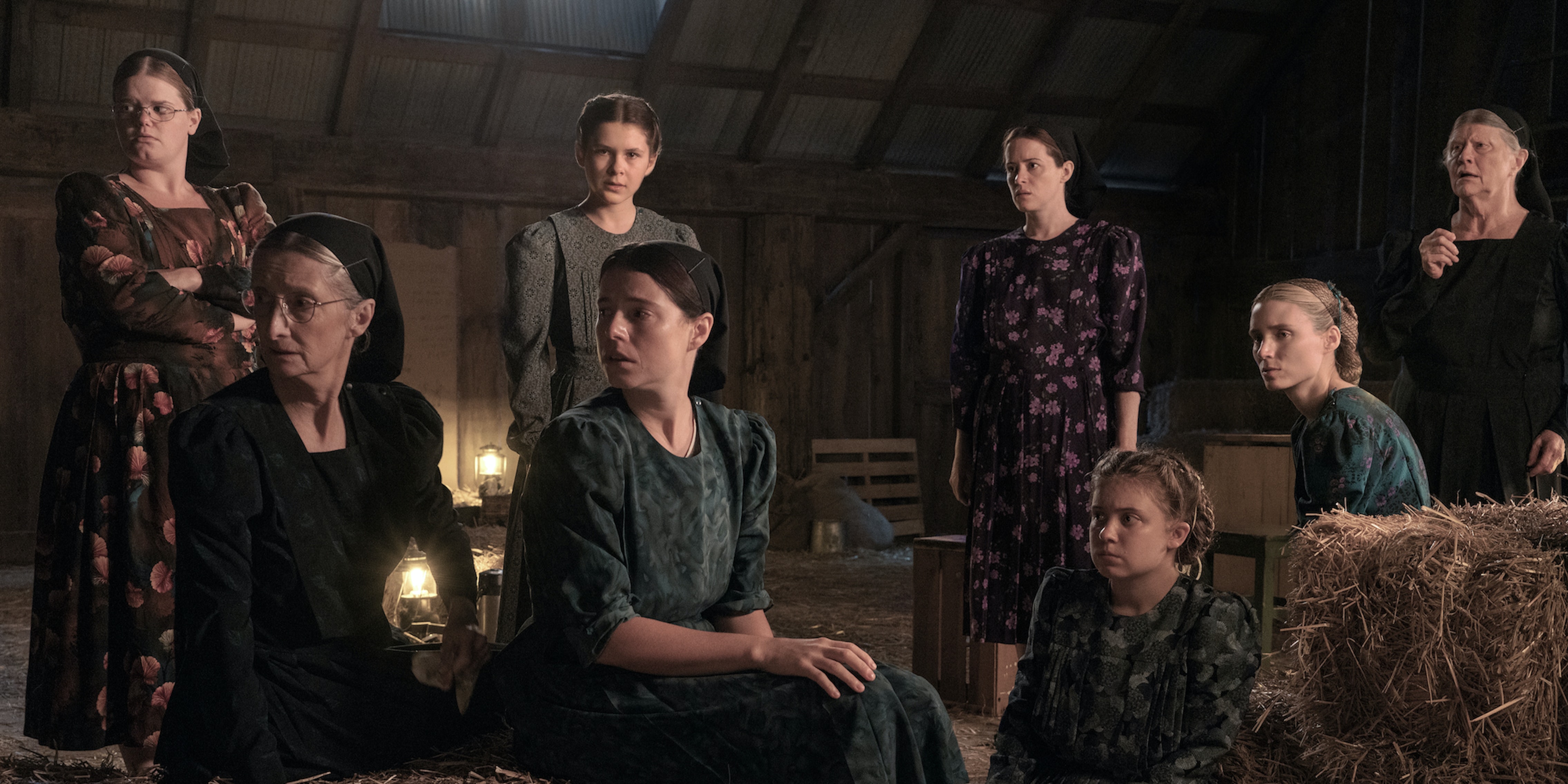 Women Talking more than lives up to its name. Over the film’s 104-minute runtime, we watch a group of women and girls from a few of the families—who’ve been repeatedly drugged and raped by men who live in their isolated, patriarchal Mennonite colony—discuss their next course of action. What follows is an engrossing, heated, and often philosophical debate that Women Talking describes as “an act of female imagination.” They parse the meaning of words like “free” and “safe,” and they sometimes lob the kinds of attacks that only come with living around one another for decades. Throughout, many of them envision what they think they deserve from a community they’re members of.

Release Date: Dec. 23, 2022
Director: Sarah Polley
Release: Theatrical
In the wake of horrific and systemic rapes of girls and women in an isolated Mennonite community over several years—resulting in the perpetrators being jailed for their own protection—members of two of the affected families meet and discuss what all the women in the community should do next.

Based on the 2018 novel by Miriam Toews (and was itself inspired by true, horrific events in a Mennonite colony in Bolivia), Women Talking could’ve easily been a play. It mostly takes place in a single location, a barn loft overlooking the colony, and it features more than a few impassioned speeches full of righteous anger; many of the characters get at least one moment to shine. But Sarah Polley, who directed and wrote the screenplay, does something masterful in adapting Toews’ book into a timely and timeless story and breathes life into it. It’s gut-wrenching and infuriating and hopeful all at once as it imagines a fuller spectrum of what could be possible in a world they create.

In a voiceover delivered by Autje (Kate Hallett) to the child of one of the other women, she relays the events of what happened: For years, the women and girls of the colony would wake up seeing what happened to them without any knowledge of how it happened. They were told by the colony’s men that ghosts or Satan himself were punishing them for some indiscretion or sin, at least until they caught one of the rapists trying to escape a bedroom, who named others.

Like She Said, another film released this year that explores similar themes (from a much different part of the world), Polley opts not to show any of the violent acts enacted against any of the characters. At times, we catch brief glimpses of the aftermath, flashing just long enough for you to understand (and whichever character is on the screen at the time) to comprehend; we see bruised legs, bloodied sheets, and nightgowns, and the slow realization that something terrible happened to them creeps in. Hildur Guðnadóttir’s haunting score helps with some of that as it weaves in dread and hope in equal measures.

And we see just how that affected them, from a miscarriage and a pregnancy to lost teeth and panic attacks. They’re still grappling with the effects of being gaslit by the men who shaped their lives and their entire way of living. “They made us disbelieve ourselves. That was worse than…” Mejal (Michelle McLeod) says before trailing off.

August (Ben Whishaw), a teacher who recently returned to the colony after years of exile and who is haunted by his own demons, is permitted to take the minutes of this meeting; even if none of the women can read them, they want a record of what transpired. “Even the animals in our homes are safer than we women are,” Ona (Rooney Mara) laments, and returning to the status quo (“do nothing”) is not an option. The families are really parsing over whether their community is worth saving (“stay and fight”) or if they should abandon it, even if it means they may never enter the Kingdom of Heaven (“leave”).

The muted cinematography and lighting give Women Talking more of a historical feel, a decision that sometimes unnecessarily darkens some scenes and washes out some of the characters. You might think it’s fitting in with the time period of this movie, at least up until, in a moment of brief levity, a truck blaring The Monkees’ “Daydream Believer” drives through the colony with the driver asking the community to come outside so they can be counted for the 2010 Census that dispels that notion.

But their conversations are just as relevant today in a world where we’re still reckoning with systemic sexism, where power fuels sexist societies, and where survivors still have to be viewed as “perfect victims” for them to be taken seriously (and even then, their perpetrators can still get away with nothing more than a slap on the wrist).

What follows, as these girls and women try to come to a decision, is the kind of nuanced debate around rape culture that we don’t always see onscreen. It’s often bombastic as Salome and Mariche (Jessie Buckley) give the kind of impassioned speeches defending their choices or lash out at others who offer minor slights. Matriarchs Greta (Sheila McCarthy) and Agata (Judith Ivey) are more resigned, having seen their complacency in the colony has led to their daughters and granddaughters suffering, such as Mariche being physically abused by her husband. Ona is contemplative, while Mejal is just trying to keep it together. Autje and Nietje (Liv McNeil) mostly keep to themselves, although they’re the most upset when someone suggests the possibility that some of the men are innocent. But together, they work through the most significant decision of their lives; for once, in a colony where they give birth to as many children as they can and are conditioned to ask for nothing, they’re thinking about what they want for themselves and their children.

Women Talking doesn’t have all of the answers, nor is it a full-on slog of misery. It demonstrates the negative effects of internalized misogyny, both in how some of them treat August (who is emasculated more than once because he’s a teacher rather than a farmer) and how, even though those terrible things happened to everyone, they’re still judged about how they react to them. In the case of unmarried Ona, she’s slut-shamed for things she couldn’t control. But Polley and the actors refuse to flatten these characters to a barrage of talking points, giving them chance to speak for themselves. And what they envision is something a little incredible.