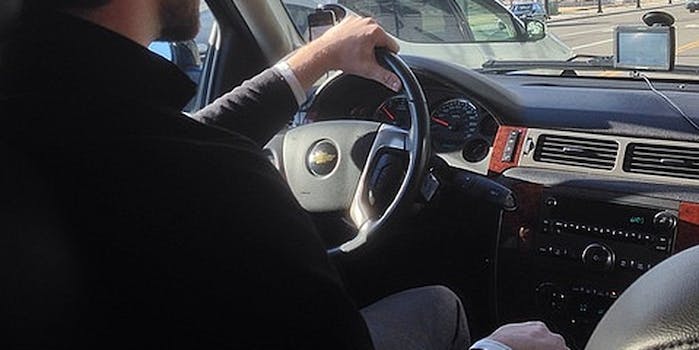 Your typical cab driver may not always know where he’s going, but he usually keeps his hands to himself. Which makes it all the more shocking that Uber—the app-based, flexibly-priced chauffeur service—now faces a lawsuit claiming that one of their employees didn’t.

The suit against the accused assailant and San Fancisco’s Uber Technologies Inc. was filed Wednesday in Cook County Circuit Court. It details a sordid March 8 ride to Chicago’s North Side in which the driver refused to follow directions, then persuaded his passenger to sit up front and help him navigate, at which point he began stroking her legs, groin, and chest, asking for her number, telling her they would go out for dinner and have sex.

He allegedly drove down side streets, stopping now and then to fondle her, and locked the car doors so she couldn’t escape. When she threatened to call the police, the victim stated, the driver tried to force her out on on outer Lake Shore Drive. Eventually, she disembarked near Diversey and Clark, and the driver “begged her” not to tell anyone what had happened. Since the attack, the plantiff says, she “has had mood swings and nightmares” and become afraid to leave her home.

The driver will answer to six charges, the Chicago Sun-Times reported: “Negligence, willful and wanton misconduct, battery, intentional infliction of emotional distress and false imprisonment.” Uber itself will deal with a claim of common carrier liability. The company said it “deactivated the driver’s account after hearing about the alleged incident and does so for similar complaints,” which makes us wonder how many harassment cases have been swept under the rug already.

The $50,000 in damages the customer is seeking can be added to the growing list of legal headaches for Uber, which is currently being targeted for unfair business practices and just moved to expand their drivers’ insurance following a wrongful-death suit over a 6-year-old girl killed by one of their vehicles in San Francisco on New Year’s Eve.

All of which is to say, if it’s a choice between Uber or nothing, you may as well just walk.