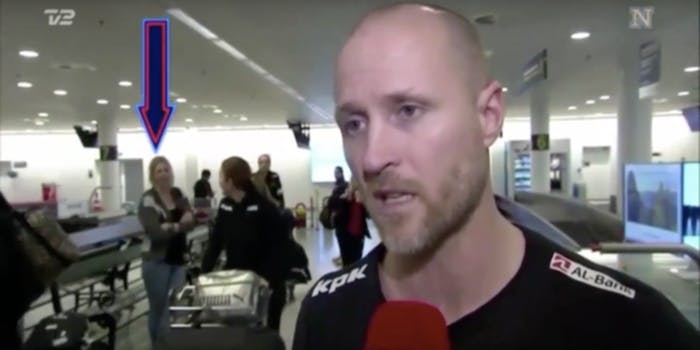 First you see it, then you won’t.

The Internet is flipping out over what appears to be a woman vanishing into thin air while on television. In a video for Sports Center on Norwegian television network TV2, the athlete being interviewed is supposed to be the main point of attention. It looks like they’re talking to him at an airport, where there’s a little bit of hustle and bustle behind him. But a woman behind the athlete steals the show by just straight-up disappearing. Check out the clip:

And thankfully someone over at Imgur was kind enough to preserve the moment in GIF form.

So what exactly happened? Some sort of witchcraft? Is she an alien with teleporting powers? As much as we’d like to believe in the mystical or supernatural, it’s likely that the woman pushing a luggage cart was just the perfect cover for the disappearing woman. The apparent apparition probably just unintentionally synced up perfectly with the woman in front of her as she began moving herself, creating the effect. I guess it’s all about perspective. Still pretty cool, regardless.

But since magicians never reveals their secrets, we might never get the full explanation.