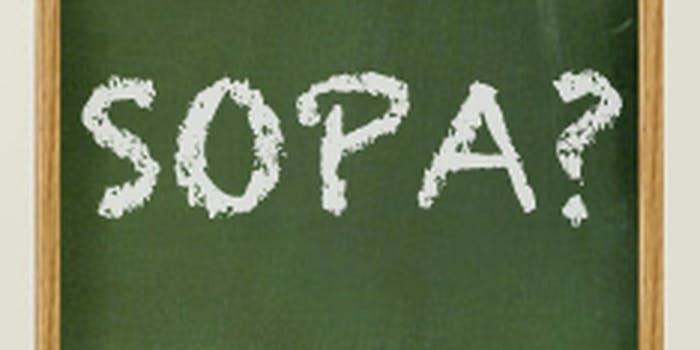 A primer for those wondering what the difference between SOPA, PIPA, and OPEN are—and how they might affect your life.

You’ve heard that a lot of people don’t like the Stop Online Piracy Act (SOPA) or the Protect IP Act (PIPA). You know all about the what. But you might not be clear on the why.

To help, the Daily Dot has put together an explanatory piece. Even if you’re up on the legislative details, you can share with your less SOPA-savvy friends or family when they ask what the deal is and wonder why all their favorite sites have gone dark today.

Here’s what we know about SOPA, PIPA, and their less controversial cousin, OPEN.

Here’s how the bill, as proposed, would work:

First, an Internet user publishes or otherwise distributes copyright-infringing material. That could be a movie clip, a song, or a photo that the user does not have the rights to publish or use.

Next, a copyright holder or the Department of Justice would seek a court order against the website on which the infringing material was hosted or made available. If the order is granted, the website would be punished for promoting pirated material.

Advertisers would no longer be able to sell advertisements on the website in question. Search engines would have to delist the site so people couldn’t search for it. Payment processors could not transfer money to the website’s accounts. And if the copyright infringement were deemed serious enough, the site would be shut down indefinitely.

As originally written, the bill would have also blocked domain-name-service, or DNS, lookups for websites that were found to contain infringing content. (DNS is the process by which Web browsers and other Internet software translates the numeric addresses of websites and other servers into domain names like dailydot.com.) However, this clause was removed from SOPA last week.

In other words, the bill, as proposed, will put more power in the hands of the government and the entertainment industry to police the Web. They will be able to shut down sites that they think are either infringing copyright or not working hard enough to prevent copyright infringement.

Since this puts the burden of copyright protection on websites, this means social networks as big as Facebook, Tumblr, and YouTube could be shut down by the government overnight if the government finds evidence of copyright violation. Since users frequently post quotes, pictures, and video clips from movies and TV, that evidence would not be hard to find.

SOPA has been shelved for now. That does not mean the bill has been killed, but that the House Majority Leader, Eric Cantor, is waiting for more members of Congress to agree with the bill before it is debated. If Cantor thinks enough of his fellow members support the bill, he can bring it to a vote later on.

(Initiatives  by different names are commonly introduced separately in the House and the Senate. And if both are passed, a committee of congressmembers and senators reconcile them into one bill.)

The second main difference is that PIPA would not allow the government or the entertainment industry to seek legal action on its own. Instead, the court system would have to interfere first and rule on whether a copyright violation had truly occurred.

However, several sites are still against PIPA.

That’s in no small part because the court system has not had the best track record with Internet regulations. For example, an out-of-touch judge who didn’t understand Twitter ruled that a woman was responsible for avoiding harassment from her online stalker. A judge may see YouTube, for instance, as a den of piracy, ignoring the many broad exemptions granted under copyright law for fair use.

For this reason, sites like Reddit and Wikipedia are shutting down today to offer a glimpse of what the Internet might be like under SOPA and PIPA—and to convince users to take action. The Motion Picture Association of America has dismissed their protests as a “dangerous gimmick”—but you would expect Hollywood’s lobbying arm to say that.

Congress doesn’t operate in a vacuum. When members of Congress saw that SOPA and PIPA were causing a lot of controversy, Senator Ron Wyden (D-Ore.) and Rep. Darrell Issa (R-Cali.) began drafting a bill to take people’s concerns into context.

It’s called the Online Protection and Enforcement of Digital Trade Act—OPEN for short. (No one said Congress was good at forming acronyms.)

Instead of targeting copyright infringement indiscriminately, OPEN would make international Internet piracy a trade issue referred to the United States International Trade Commission, instead of a legal issue for US courts and the Department of Justice.

By placing internationally-based piracy websites under the jurisdiction of the US ITC, the commission can cut off revenues to the site from the United States. They can do that by blocking American transfers of money to the site and associated accounts. OPEN would not target sites registered in the United States, since they are already covered by US law.

OPEN is backed by companies that oppose SOPA and PIPA, like Google, Twitter and Facebook. It is opposed by the MPAA and the Recording Industry Association of America, or RIAA, the music industry’s lobbying counterpart.