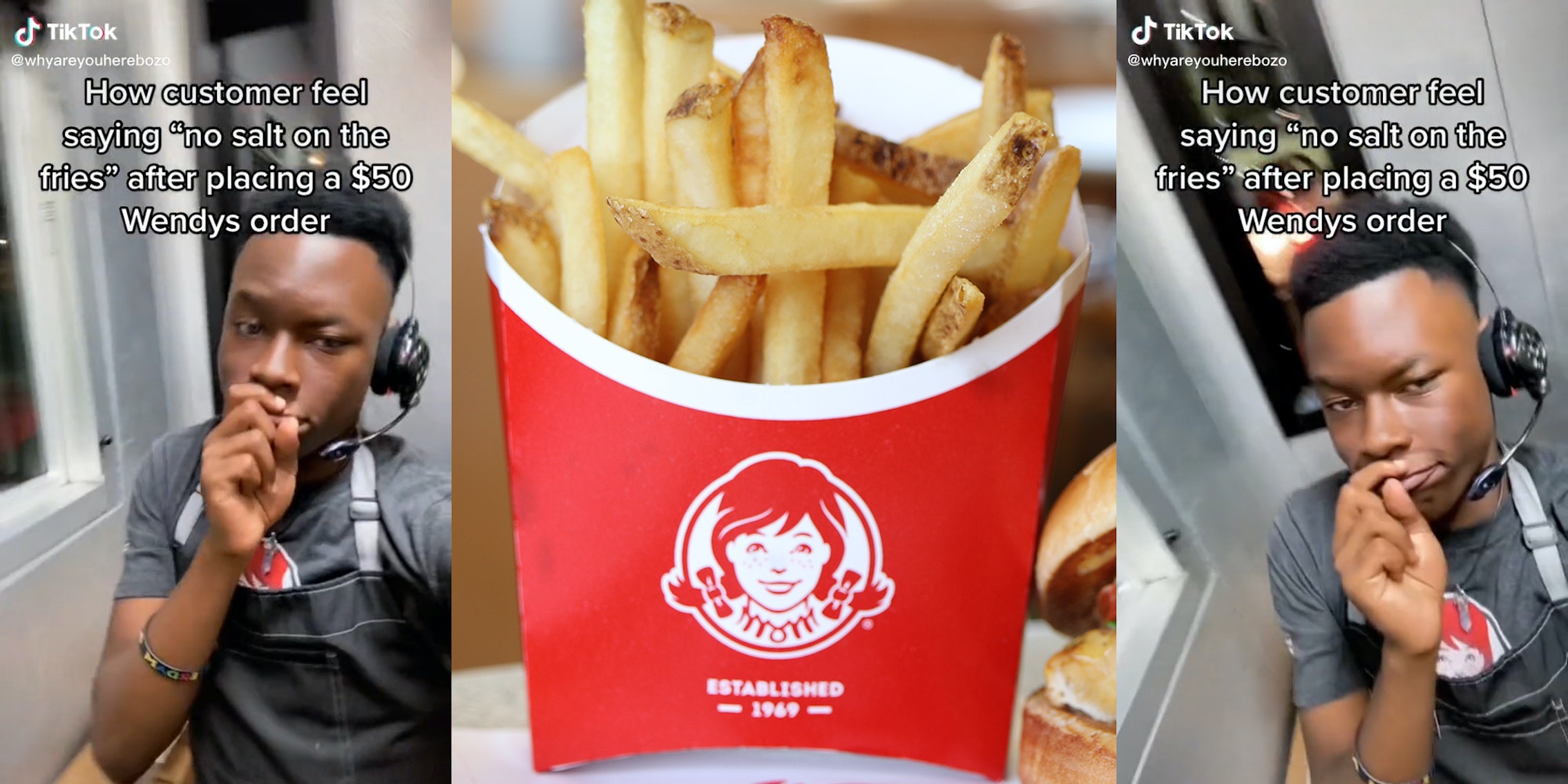 ‘Don’t even worry about that diet coke’: Wendy’s employee mocks customers who request ‘no salt on the fries’ on $50 order

'They do it so they can get fresh ones lol.'

A handful of fast-food employees recently revealed their feelings about customers who make “healthy” modifications to otherwise unhealthy orders.

It all started with a TikTok video from Will (@whyareyouherebozo). In the video, he records while he’s working at Wendy’s. The text overlay on his video reads: “How customers feel saying ‘no salt on the fries’ after placing a $50 Wendy’s order.” Will dances as he stands by what looks like a drive-thru window at the store.

The TikTok, which was uploaded to the platform in August, has over 320,000 views.

Like girl dont even worry about that diet coke

He doubles-down on his take in the video caption, which reads, “Like girl, don’t even worry about that [Diet Coke.]”

His video was apparently a knock on customers to make last-minute modifications to their fast-food orders to attempt to make them “healthier.” What Will seems to question, however, is whether these changes are worth it—or even helpful.

Indeed, several commenters appeared to agree that the tweaks are useless.

“It baffles me how much people spend at these awful fast food places,” reads one comment.

“At [Chick-fil-A] people always order frosted lemonades with diet lemonade that cancels out the, like, 70% of the cup that has ice cream in it,” wrote one user.

To this, Will responded: “I’m saying. Like at this point, take the diabetes and enjoy life.”

Others, however, wondered whether these customers are asking for no salt for dietary purposes. Many said that the ask was likely due to a want for fresher fries.

“It’s so they get fresh fries, not for a diet,” reads one comment.

“They do it so they can get fresh ones lol,” wrote a fourth user.

But Will admits that asking for no salt—or extra salt, for that matter—doesn’t do anything. That’s because fast food employees, he said, rarely prepare fresh fries for every individual order.

“We just re-dip them in oil, so it’s really fresh,” he replied to one of the comments on his post.

This appears to be true, as many McDonald’s workers have shared in the past that they use this tactic.

The Daily Dot has reached out to Will via TikTok comment.