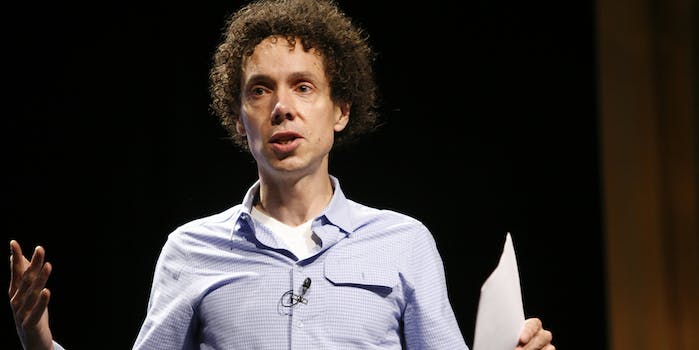 Gladwell may have bigger problems than his pseudo-facts.

Writing on Our Bad Media, their WordPress site, the duo suggest that in all our handwringing over the scientific inaccuracies or exaggerations in pop-sociology books like The Tipping Point and Blink, readers may have overlooked Gladwell’s pattern of lifting material from other writers without attribution. They point to an anecdote about Steve Jobs and Xerox Corp., a detailed description of a 19th-century railway construction project, and passages about the famed Greensboro sit-ins of 1960 as examples.

Also cited are Gladwell’s periodic defenses of known plagiarists and fabulists (including former colleague Jonah Lehrer, once his heir apparent), framed by a string of failures at the New Yorker’s vaunted fact-checking department—including a case in which the magazine “had effectively plagiarized itself,” in the words of Columbia Journalism Review’s Edirin Oputu.

The report drew sharp commentary from all corners of Twitter, both Weird and not.

if Gladwell had just cited sources he would have been doing the original authors a favor w/ more attention but noooo https://t.co/Qkczyy9l53

If Malcolm Gladwell has been plagiarizing all along, then he must have been stealing from some awful, ponderous writers.

Malcolm Gladwell always pissed me off for shilling for big tobacco and obnoxious writing. I hope the knife continues to be twisted for him.

It’s unclear what lasting impact @blippoblappo and @crushingbort’s claims may have. Their exposé of Johnson resulted in his ouster from BuzzFeed, but the long campaign against Zakaria has only netted some red-faced corrections and apologies by his publishers for “problematic” work; he is still employed by both CNN and the Washington Post. (He was also, at one point, apparently editing his Wikipedia page to bury the plagiarism accusations.)

But if Gladwell believes his own dubious theories, he ought to be worried—he did write David and Goliath, after all. Or did he? Whatever, my brain hurts.

David Remnick, editor-in-chief of the New Yorker, has issued a statement in response to the charges outlined above:

The issue is not really about Malcolm. And, to be clear, it isn’t about plagiarism. The issue is an ongoing editorial challenge known to writers and editors everywhere—to what extent should a piece of journalism, which doesn’t have the apparatus of academic footnotes, credit secondary sources?  It’s an issue that can get complicated when there are many sources with overlapping information. There are cases where the details of an episode have passed into history and are widespread in the literature. There are cases that involve a unique source. We try to make judgments about source attribution with fairness and in good faith. But we don’t always get it right. In retrospect, for example, we should have credited Miles Wolff’s 1970 book about Greensboro, because it’s central to our understanding of those events. We sometimes fall short, but our hope is always to give readers and sources the consideration they deserve.