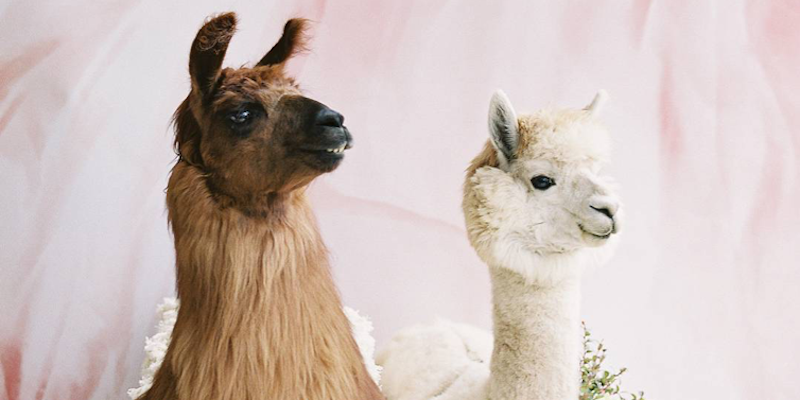 These llamas that go to weddings are becoming Instagram superstars

Why wouldn't you want a llama at your wedding?

It’s like something you’d see in an episode of Portlandia, but I assure you, it’s real: a couple of adorable therapy llamas that get dressed up and go to weddings in the Portland area, posing for photos with the bride and groom. Rojo and Smokey, and sometimes their friend Napoleon the alpaca, are building their reputation not just at Oregon weddings but on Instagram as well.

The “wedding llamas” only have about 2,500 followers so far (Rojo’s solo account has around 6,000), but that’s likely to change soon, due to a spate of press coverage this month from the likes of Brides magazine and the Huffington Post.

Rojo, the 15-year-old llama who started it all, is “incredibly touchable, and unusually people-friendly,” according to his handlers. Apart from his wedding gigs, he also turns up to parades, hospitals, and local events in the Portland and Vancouver, Washington, regions. He also looks really cute in a little hat:

And his pal Smokey isn’t afraid to rock a bridal getup:

Although it seems Rojo is more often paired with Napoleon, a smaller, fluffier, and less intimidating alpaca:

Do they give kisses? Oh, I’m so glad you asked. Yes. Yes they do:

Jump on the bandwagon now, because Mtn Peaks Therapy Llamas & Alpacas could be the next Old Friends Senior Dog Sanctuary (described by New York as “the last pure place online“), an animal refuge whose residents become big stars as people bond with them on social media.

Congrats on your viral success, Rojo, Smokey, and Napoleon. Don’t let it go to your fluffy li’l heads!