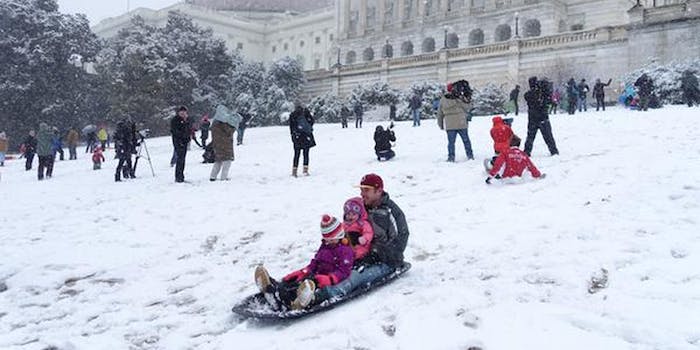 We the People of Washington, D.C., in order to form a more perfect Snow Day, establish sledding on Capitol Hill.

A major winter storm has taken over the country from Texas all the way up to New England, but the folks in Washington, D.C., are just trying to sled down the country’s most famous political slope.

Sledding on Capitol Hill has been illegal since the Sept. 11, 2001 attacks. In anticipation of today’s big weather event, D.C. Del. Eleanor Holmes Norton (D-D.C.) sent a letter to the Capitol Police asking for the rules to be temporarily suspended, noting that the Capitol grounds offered some of the best hills in D.C. Her request, however, was denied.

But this time around, the people weren’t having it. Tim Krepp, a D.C. tour guide, asked his Twitter followers to protest the decision Thursday by starting a “Sled-In.”

“Despite efforts, the sled ban has not been waived for this weekend,” someone going by the nickname “Prince of Petworth” wrote on the D.C. blog Popville. “But if you are up for a little civil disobedience, a sled-in is planned for today at 1pm. West lawn of the Capitol. Come armed with sleds! #sleddingisnotacrime #SledFreeOrDie”

People protest everything in this town, & today's protest is against a ban of #sledding on the #Capitol lawn at 1. #SledFreeOrDie @wmalnews

The call to arms was successful. Out of the snowy mists, people arrived, bundled up and armed with sleds. The hashtag #SledFreeOrDie quickly spread across Twitter, and for once political parties weren’t the biggest issue on Capitol Hill. These people were sledders, and they were there to do one thing and one thing only: have fun.

The people who gathered for the Sled-In did what they did best: sledded and protested.

Fun in the snow on Capitol Hill. pic.twitter.com/WZwRPyoDWg

The sledding is underway at the U.S. Capitol lawn! @nbcwashington #SledFreeOrDie pic.twitter.com/qdR7NA1NC2

Lots of families (and reporters!) out enjoying sledding on the Capitol Hill! @capitalweather @WeatherNation pic.twitter.com/G47VRjt7fu

For some of the kids, who might have been getting their first taste of civil disobedience, it was probably also the first time they tried to go sledding with news cameras around them.

For everyone else, it was a great opportunity to make history-related jokes. In defying the law as they did, the Sled-In participants became the coolest protesters since the Boston Tea Party.

#breaking Civil Disobedience on Capitol Hill as people sled at the Capitol in defiance of US Capitol Police orders. pic.twitter.com/6uqysMnltV

Sledding on Capitol bill, in defiance of USCP Regulation 16.5.20 governing "Winter Activities" at the Capitol. pic.twitter.com/8cCsZ91E9h

No fun police RT @willsommer: Capitol Police have arrived, with copies of the no sledding rule to hand out. http://t.co/ncqgjRiOCp

At one point, the Capitol Police politely reminded citizens that it was illegal to sled on Capitol Hill, but these brave souls largely ignored the warning.

Cap Hill resident Tim Krepp said Congress "embarrassed itself" about #DHS yet w/sledding at Capitol "they're lecturing us about safety.

The police have yet to usher the sledders out, so for now, Sled-In protesters can claim victory and celebrate with the customary blankets and hot chocolate.