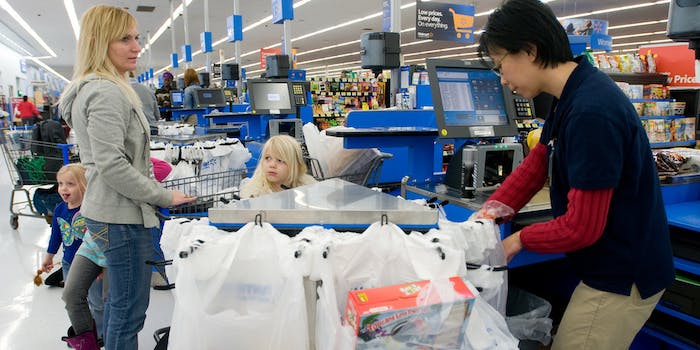 A Walmart customer headbutted an employee who did her taxes

Tax season can be a stressful time. This woman couldn't handle the pressure.

Preparing your taxes can be a stressful time, so it’s easy to see how that pressure can get the best of people. But it’s never a good idea to headbutt the person who helps you with your taxes, as one Walmart customer in Deer Park, Texas learned firsthand.

It all started when Jessica Albitz and her husband went to a Jackson Hewitt inside a local Walmart to prepare their taxes. While there, the Albitzes experienced some less-than-stellar customer service from an employee at the financial firm. As Albitz put it to Click2Houston, “she [the employee] started talking trash at my husband.” Classy!

When Albitz returned to the store the next day to do some shopping, she encountered the unpleasant employee once again. After the woman who prepared her taxes “mumbled under her breath some profound [sic] language,” Albitz snapped and the two decided to settle things WorldStarHipHop Style. The incident was caught on tape and uploaded to YouTube.

Eventually, the two were separated by bystanders, and Albitz was removed from the store. While the Jackson Hewitt employee declined to press charges, Albitz did receive a trespass warning and is “no longer allowed to go to Walmart on Spencer Highway.” The Jackson Hewitt employee has been placed on administrative leave while her supervisors investigate the altercation.

If there’s a lesson we can all take from this incident, Albitz hasn’t yet learned it. When asked if she had any regrets about the incident, the Walmart customer responded, “No…I would do it all over again and harder,” adding that she hoped the employee “remembers me for the rest of her life.” The Internet certainly will.