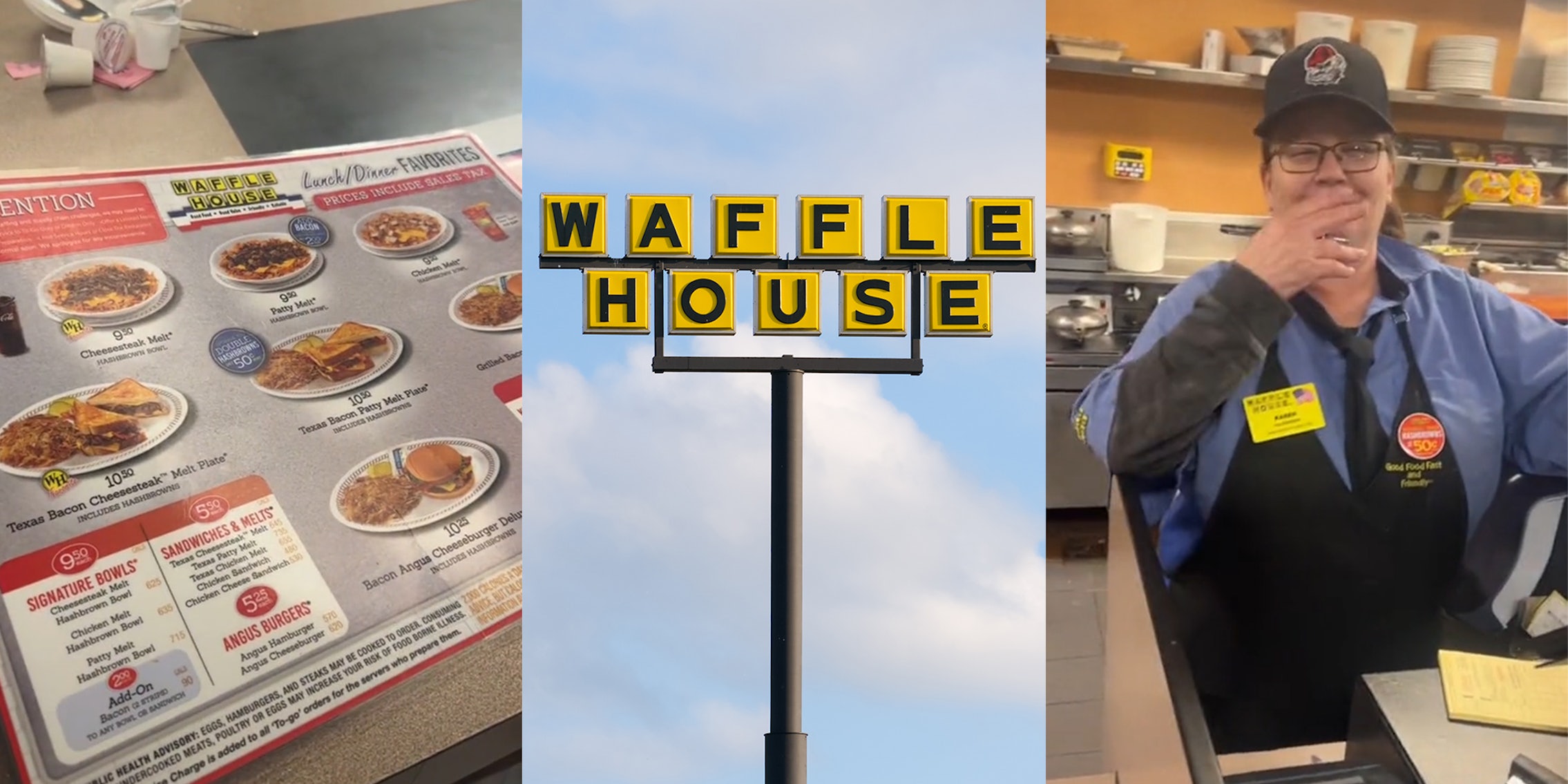 'This is the real menu!'

In 1955, two friends and neighbors: Tom Forkner and Joe Rogers Sr. decided to open up a 24-hour sit-down restaurant for their community that served comfort food, and pretty soon, that first establishment became a culinary institution.

If you’ve been a devoted Waffle House patron over the years, you may have noticed that some of your favorite meals aren’t advertised there anymore, or that there were some adjustments to the menu.

A TikToker, Mosa (@simplexedgxd), seemingly just got to the bottom of why that is: Waffle House has different menus.

“Listen, let me tell y’all something about Waffle House: I just became aware this is—,” Mosa begins before addressing presumably a Waffle House employee who is off-camera. “What do y’all call this again?”

“This is a favorites menu, right?” Mosa questions.

He then moves his camera to another part of the restaurant and points to what appears to be a long excel spreadsheet inside of a sleeve of plastic.

“This is the real menu!” he exclaims, turning it over to show that there are two different sides to the sheet. “Tons of stuff you can make.”

“See I always thought when you came in you had to order from here, you know what I’m saying?” he says, referring to the “Favorites menu” which is a staple of Waffle House locations and is usually at each seat placement in the popular American-fare chain.

“That ain’t the case,” the TikToker continues.

Mosa then thanks the Waffle House worker for filling him in.

The multiple-menu phenomenon at Waffle House isn’t exactly a secret. Mashed reported the chain’s four different menus in 2021. They are, according to Mashed, implemented in different instances, like if there’s a power outage, no water, or during an emergency when folks only have cash on hand to pay for food.

However, the full menu Mosa showed off in his viral video doesn’t appear to be part of some special circumstance. It’s just a list of all the sides, entrees, and accouterments that people can order while at the one of the chain’s locations. The Favorites menu is basically just a bunch of “meal presets” folks can order, but the full menu allows customers to customize a meal however they like and calculate what the total cost will be beforehand.

Many commenters who saw the video said that they’re just going to stick with the menu that “has pictures,” so they can point to the food that they want. Others remarked that they’ve known about the chain’s “secret menus” for a while, and then there were some who thought that thew new information was a game changer, even if it did mean that they were about to make the lives for Waffle House employees a lot more difficult.

“Bouta have people ordering waffle house like they do starbucks,” one quipped.

Update 11:14am CT, Oct. 11: The Daily Dot spoke with Njeri Boss, the vice president of public relations for Waffle House, who clarified what the document shown in Mosa’s video is.

“The Favorites Menu is what its name implies [and] its laminate cousin that was shown in the TikTok video with endless menu options …[is] an a la cart pricing menu for associates for training purposes,” Boss said.

The Daily Dot has reached out to Mosa via TikTok comment.