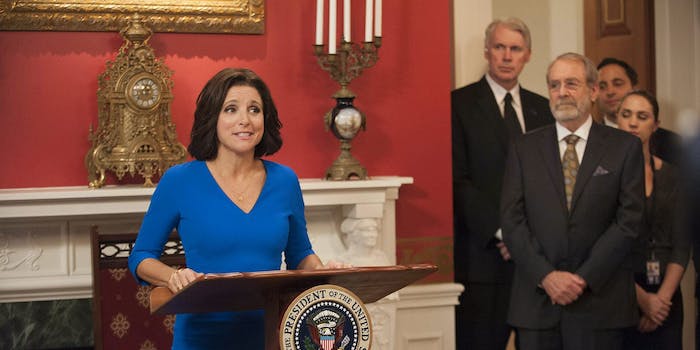 More than a few people have noted that over the past four years, much of Donald Trump’s presidency has been so outlandish that it’s essentially beyond satire. From a logistical standpoint, some of those twists and turns would be flagged for being too unrealistic in a screenplay. But in other cases, it’s beyond satire because it’s already been satirized well before we watched it happen in real life.

In the case of Nevada and its six Electoral College votes, the latter applies. The Trump campaign’s battle to get Nevada to stop counting votes is essentially a Veep episode come to life.

No, seriously. Look no further than the beginning of season 5, starting with the episode “Nev-AD-a,” which feels particularly prescient in 2020.

Granted, Veep isn’t a complete 1:1 analog of what’s happening in Nevada right now. But it more or less depicts the chaos that’s unfolding in Nevada right now as judges throw out several lawsuits from the Trump campaign arguing to stop counting votes while calling for every vote to be counted in states like Arizona.

In the episode, Selina Meyer (Julia Louis-Dreyfus) and her opponent Bill O’Brien (Brad Leland) are locked in a 269-269 tie in the Electoral College as a recount is triggered in Nevada (a state she narrowly lost); Selina won the popular vote. In the midst of the recount, it’s revealed that a postal worker with anti-Selina Meyer sentiments kept 10,000 mail-in ballots from being delivered (and then counted).

The Meyer campaign is successful in extending the deadline to have the votes tallied, although, at one point, O’Brien’s staff protests the votes being counted. But once they discover that most of the ballots came from a nearby military base that would lean toward O’Brien, Meyer’s lawyers are tasked with the absurd notion of arguing against a motion they’re arguing for in court. It goes over about as well as it sounds, which is to say, the fight to stop the mail-in ballots from being counted is unsuccessful.

Even the people who made Veep noticed the similarities.

“I believe that lawsuit would be as frivolous and ungrounded as any of the ones Republicans have filed since the election!” Veep executive producer David Mandel tweeted after someone suggested he sue for copyright infringement. “But thanks!”

If you’re looking to Veep to “predict” the results of the 2020 presidential election with Trump in the Selina Meyer position, the bottom line is, it didn’t go well for Meyer. After Meyer lost the ballot fight in Nevada, she lost Nevada too; most of the ballots equaled votes for her opponent, resulting in her losing not only Nevada but also the popular vote. And when it came time for the House to vote for president in the case of an Electoral College tie, it didn’t pan out for Meyer. But it took almost the entirety of season 5 for Veep to determine who won the election; in our case, we can only hope it doesn’t take that long (even if it might feel like it).