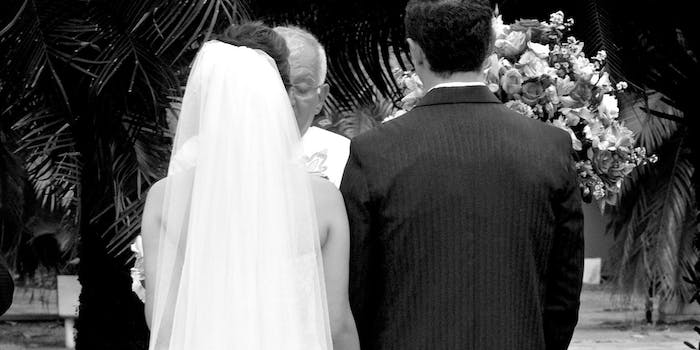 Help these newlyweds catch the thief who ransacked their wedding

Julie Wilson and Bryan Ball hosted 70 people at their fairytale Vancouver wedding. Well, 71 if you count the thief.

As captured on amateur video, the suspect blended in with the usual coterie of tourists who blithely snap pictures of weddings they happen to stroll past. With plaid shorts, a striped tee, ball cap, and backpack, he looked just like any other pattern-clashing park-goer that day, even when he went right up to the front of the crowd to take a picture.

What nobody noticed at the time was that when he left, he took apparently $6,000 worth of camera equipment with him.

Rob Wilson, the bride’s brother, explained to Postmedia News, “I personally saw him come right up to the ceremony and look to take a picture of the groom and bride standing at the altar. What I didn’t notice was him wait for the perfect moment to steal our cameraman’s bag. When we got back to the room, we viewed the footage and saw everything.”

To Global TV he added, “It is the whole idea that someone can be this careless to ruin something that special for somebody and just the thoughtlessness of it. It is sickening that people can do this to people on such a great day.”

Not only were some very expensive lenses taken, but so were the keys to the photographer’s rental car, which meant that he had to miss the reception while waiting for the car company to straighten things out. According to the comments on the YouTube video (uploaded to the husband’s account), which is now at 34,173 views, one thing that wasn’t stolen was the collection of memory cards from the photos, so at least the bride and groom still have their pictures. Photographer Martin Gregorian of Butterfly Photography isn’t so lucky; his insurance company told him that even though he is a wedding photographer, they won’t cover the loss, since it happened outside his office.

Wilson and Ball are currently honeymooning in Vegas. Wouldn’t it be a swell present if the Internet gave them the name of their light-fingered wedding crasher?

In the comments on the video, the bride posted, “Thank you to all﻿ the positive comments! Dislikes WTF?” Well, exactly.

Video footage of a thief stealing our wedding photographers equipment durring our ceremony. 3:45–4pm sept 1st at ferguson point in stanley park Vanouver BC. Check out the guy in the striped shirt black backpack and a ball cap pacing around the left of the screen. in the middle you see him in the center of the screen just behind the bride’s right shoulder. He stops looks around and then lifts up the pelican case full of cameras and walks off. If you saw this or know the piece of crap human being please leave any info. People would like [their] memories back.