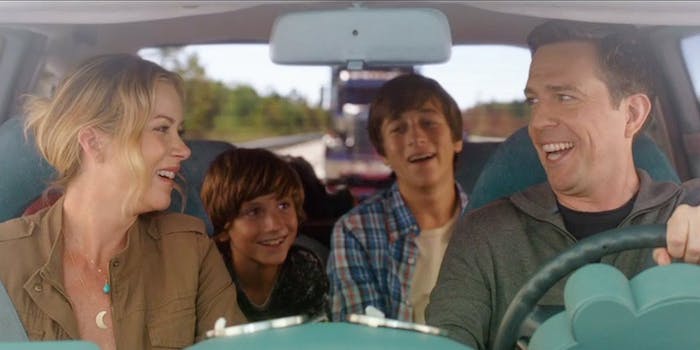 If Hollywood is still churning out lazy crap, stop paying for it

Tired of hearing how bad Hollywood's diversity problems are? Don't give them money.

Yesterday, news broke that a study from USC Annenberg showed that the multiplex is whiter and more male-dominated than ever. The school found that since 2007, the percent of women, minorities, and LGBT people in the top 100 grossing movies haven’t changed. “In 2014, 12.5 percent of characters were black, 5.3 percent were Asian and 4.9 percent were Latino,” the Hollywood Reporter explains. “These proportions have remained statistically consistent every year since 2007.” Even worse, not a single woman over the age of 45 starred as the lead of a top-grossing film in 2014, while only three leads were women of color.

Twitter was customarily up in arms by these appalling numbers, but if you’re at all surprised by them, you must not be paying attention. In May, the ACLU filed allegations of hiring discrimination in the movie industry, as just seven percent of the top 100 grossing movies were directed by women, but despite all that outrage, the movies are still doing just fine. Despite forcing Bryce Dallas Howard to flee prehistoric mutant reptiles in high heels, Jurassic World became the third-highest grossing movie of all-time in the U.S., breaking the record for the biggest opening weekend ever. This was just weeks after Age of Ultron posted the second largest opener.

I saw Jurassic World, just like you likely saw Jurassic World. And why? If we’re so unhappy with a broken system that rewards a handful of white men (many of whom are named Chris) at the expense of women, people of color, and queer folks, why do we keep forking over our money just to be dissatisfied the next time we get the same old story wrapped in a milquetoast Caucasian package? If the system is broken, it’s time to stop paying for it to stay that way. After all, you don’t have to give studios your money.

Case in point: Next weekend, you could go see Guy Ritchie’s The Man from U.N.C.L.E., because hey, you liked Lock, Stock, and Two Smoking Barrels—and if you’re over 50, maybe you’re a fan of the TV show. But it’s also a long-delayed remake that sounded promising back when Steven Soderbergh was attached; instead, the studio settled on a past-his-prime wannabe auteur who arguably hasn’t made a good movie since Snatch (which came out 15 years ago) and cast two actors (Armie Hammer and Henry Cavill) that it’s actively hard to tell the difference between. When we already have three Ocean’s movies, what’s the point?

Instead of seeing another Marvel movie or another National Lampoon’s Vacation sequel or another failed attempt to make fetch happen with the Fantastic Four, you could just not do that. In the age of the digital and streaming revolution, you have an infinite number of options by which to consume media. None of those options necessarily entail wasting $15 dollars to watch Ed Helms bathe in toxic waste.

What’s striking about the USC Annenberg statistics is that they only apply to the Top 100 grossing movies, not the number of far more inclusive (and better made) independent films playing at your local arthouse cinema. Last night, I caught a showing of 1992’s Swoon playing at Film Forum in New York, a landmark work in the New Queer Cinema canon that helped herald a new generation of LGBT filmmaking. Directed by Tom Kalin, it’s an avant-garde account of the Leopold and Loeb murders, which shocked a nation that still classified homosexuality as an aberration. Swoon is not only haunting but gorgeously impressionistic, a film told in the tiniest of brushstrokes.

This weekend, Whit Stillman’s Metropolitan is getting a re-release in theaters, one of the great coming of age films ever made. You can also check out The Diary of a Teenage Girl, a frank look at a 15-year-old’s sexual awakening based on an acclaimed graphic novel; it also co-stars Bridesmaids’ Kristen Wiig. There’s also Dope, a Sundance hit about a black nerd growing up in Los Angeles, and Five Star, which IndieWire described as like “John Cassavetes directing an episode of The Wire.” You could see The Look of Silence, Amy, and Best of Enemies, three of the best reviewed movies of the year.

Every single one of the movies I named features people of color, women, and LGBT people in lead roles, telling the stories often not deemed suitable for mass consumption. They break boundaries and ask you to see the world in a new way, which is why you might have to work a little harder to seek them out. They might not be playing at a theater near you yet, but that doesn’t mean you can’t catch them. What’s great about indie films in the Internet age is that they’re often available online—through YouTube, or Amazon—just weeks after they’re released in theaters. Two of this year’s biggest indie hits, Ex Machina and Laggies, are in the top five on iTunes.

Instead of seeing another Marvel movie or another National Lampoon’s Vacation sequel or another failed attempt to make fetch happen with the Fantastic Four, you could just not do that.

If great, acclaimed movies for some reason aren’t your thing, you still don’t have to have to sit in a theater to watch a bunch of creepy bananas speak in cutesy gibberish. On Wednesday, the first two episodes of Difficult People dropped on Hulu, the well-reviewed comedy from Amy Poehler starring Billy Eichner and Julie Klausner. It’s one of an estimated billion TV shows—from Netflix’s Orange Is the New Black and The Fall to Amazon’s Transparent—that are much, much better than anything playing at your local AMC. The Internet’s Golden Age of Television offers an absurd amount of TV that isn’t just good—it’s showing Hollywood that you don’t have to choose between diversity and quality.

While TV and indie films in the digital era are picking up the slack, the mainstream movie industry is still failing us—and will continue to do so as long as we let it. Following the success of 1965’s The Sound of Music, Hollywood flooded the market with a slew of big-budget musicals, which cost the studios a fortune when they flopped. That crash generated what was arguably the greatest decade in filmmaking—1970s, when young auteurs were given the creative license to help the industry rebuild. That decade brought us classics like Dog Day Afternoon, Annie Hall, and An Unmarried Woman, all of which were studio films.

It’s easy to say that none of those movies could get made today, but they are getting made; people just aren’t seeking them out. The problem is that we’d rather complain about how bad things are than doing something about it—by finally letting the system crash and reboot itself.