After the Donald Sterling scandal, Nimrod Kamer investigated V Stiviano's Instagram account and found a host of people to unfollow there.

Donald Sterling girlfriend’s name is V. Stiviano. (“V” stands for voluptuous.) Surprisingly, V. did not delete her Instagram account, even though it was the source of the NBA’s biggest racial scandal in recent memory. Why would she? She can’t afford to losing her photo-sharing platform just because her partner is mad at her for posing with black people, Magic Johnson specifically.

With her Instagram account thrust into the spotlight, let’s take a closer look at the people she’s following. 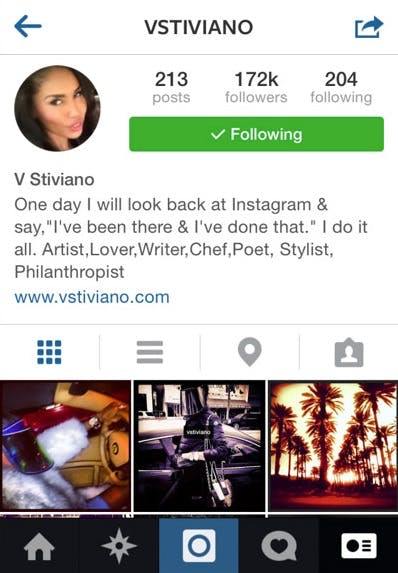 V. is following this rapper just to annoy Sterling. Looks like they’re friends, though. Why would Los be in touch with V. when she enjoys the money and perks of someone who thinks Los is inferior? Also, King Los had this incredibly embarrassing pic posted on April 8 where he thanks god three times. Rappers shouldn’t be religious. Unfollow.

This dude’s bio says it all: ‘Work hard in silence, Let the success make noise <fist-emoji>’. Every single image he posts on Instagram is a quote, which begs the question: Why does he not post them on Twitter. Waste of screengrab space. Sometimes he just opens notepad, writes a note, screengrabs it, and lets his West Coast debutantes dig in. In a rare pic with some visual elements in it, he puts this bizarre and offensive image.

She’s loves to be BAE (before anyone else). Describes herself as sexy with a bit of gangster. She believes in “romantic slaps on the ass” and urges her followers to not believe everything they think. On second thought, maybe she should be followed by V. For some it’s the highest honor.

He’s a standup comedian, so he has to do many faces on Instagram. He’s one of the only WASPs that Sterling’s girlfriend follows. Maybe she hired him for a private function. To make sure he is a comedian, he’s got his Instagram username set as @maxcomdeian. The actual comedy is lost on this since his page is full of posters of upcoming shows and that’s pretty much really it. Plus some funny faces.

The question now is who’ll be V. Stiviano’s next boyfriend. She’s past the point where she needs another sugar daddy. No preconditions.