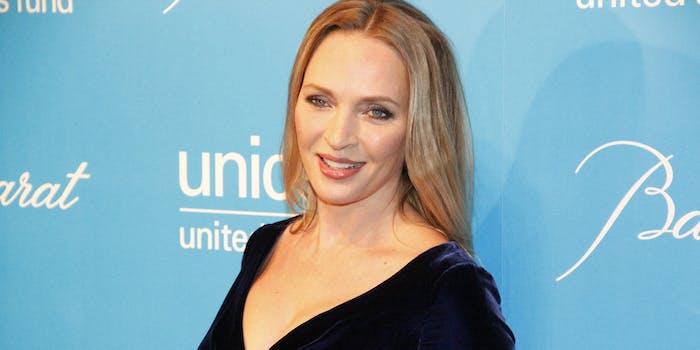 Beauty is a choice, and it belongs to the woman who wields it.

Whenever headlines cry out suspicion of a female celebrity’s plastic surgery, my first instinct is nearly always to scoff, “Who knows and who cares?” It’s her face, her body, let her do what she wants. It bothers me, as a woman, that we are subject to so much scrutiny and that there are so many ways in which a woman can be wrong simply by opting to make her face and body visible in the world.

When Uma Thurman stepped out at the premiere of her new NBC miniseries The Slap on Monday, her oft-admired face turned heads and triggered a slew of sensational headlines. While US Weekly called it “shocking,” the Daily Mail was perhaps the most vicious, citing her “suspiciously smooth forehead and tight smile” and pointedly asking, “Now what has Uma Thurman done to her face?” Twitter had a similar meltdown.

I think we all know who's responsible for Uma Thurman's facelift pic.twitter.com/FuWXKAw1j1

Other news outlets likened her “transformation” to Renée Zellweger’s much discussed new look. “Is Uma Thurman the Next Renée Zellweger?” asked a headline at Fox News. Zellweger received similar attention in October when she appeared at the Elle Women in Hollywood Awards.

And then, of course, there were outcries against the outcry. The Gloss released a guide explaining “How Not To Talk About Uma Thurman And Renee Zellweger’s ‘Plastic Surgery’ Faces.” The guide urges readers to “acknowledge that they look different” but also to “respect their choices.”

This follows the usual pattern of media attention. When well-liked actresses dare to look different from what we expect—or, heaven forbid, age—they are often subject to outcry. First come headlines dissecting the look, picking apart the star’s features for evidence, followed by invectives against plastic surgery, and finally op-ed pieces shaming the media for shaming women who dare take personal measures to alter their physical appearance. But we often fail to investigate why we care so much about these perceived changes in appearance in the first place.

The fact is we care because these women represent our standards of beauty. And, as a culture, beauty is very important to us, even though what exactly “beauty” looks like is certainly up for debate. In her 1991 book, The Beauty Myth, Naomi Wolf argued that our cultural notion of “beauty” is a myth, one we keep in place to keep women in their place.

“Beauty” is a currency system like the gold standard. Like any economy, it is determined by politics, and in the modern age in the West, it is the last, best belief system that keeps male dominance intact. In assigning value to women in a vertical hierarchy according to a culturally imposed physical standard, it is an expression of power relations in which women must unnaturally compete for resources that men have appropriated for themselves.

When we discuss the faces and bodies of aging one-time ingenues, we’re really debating the parameters of what a woman can or cannot look like at a given age, and in this way we’re assessing her access to power. It makes sense that we expect aging female celebrities who hold the most “currency” when it comes to beauty, to hold on to that status and power by doing whatever it takes to remain beautiful. In short, while it may seem petty, a lot stands to be lost or gained.

In Thurman’s case, the big reveal has been that apparently all the noise was for naught. Thurman’s makeup artist told Refinery29 that the perceived changes were due to nothing more than a departure from the actress’s signature makeup.

“We did a much stronger brow and a bold lip for a French sort of feel,” Surratt said. “I applied a creamy foundation for all-over glow, and then contoured the hairline and her cheekbones, adding warmth. I applied the lip—my color in Mégalomane mixed with Peccadille—and then we just kept the eyes really, really light.”

Thurman herself then appeared on NBC’s The Today Show Thursday morning, looking very much like herself. When questioned about the commotion Thurman simply shrugged, “I don’t know, I guess nobody liked my makeup.”

I found this reveal both funny and exciting. Anyone who’s watched a YouTube makeup transformation tutorial, or enjoyed an episode of RuPaul’s Drag Race, should be familiar with the magic of contouring. If you haven’t, I recommend visiting Promise Phan’s YouTube channel dedicated to transformations. The makeup artist transforms her features into a variety of celebrities ranging from Taylor Swift to Nicki Minaj and Beyoncé with remarkable results.

What’s fun about these videos is not just the visual magic of the transformation, but their ability to reveal the bigger illusion of what we think we’re seeing when we look at a celebrity. Most of the time we are not seeing their face, rather we’re seeing their signature look, as created through meticulous hair, makeup, and styling.

As Daniel D’Addario wrote in Time, the outcry over Thurman’s appearance shows “the limited number of tabloid narratives there are to write,” as well as “just how constrained options are for actresses.” As D’Addario shows, you can attain power through beauty, but once you do you must retain it by being one thing and one thing only.

We’re accustomed to changes happening in a gradual, barely noticeable fashion, either with stars we see in the tabloids every week or with friends whose self-portraits we track on Instagram. That’s why it comes as a noteworthy shock when years have elapsed in a person’s life without our having been there to witness it. Should Thurman, then, avoid the spotlight altogether, because so much time has passed since she’s found a Kill Bill-level role? Should she wear something less severe than a black dress and jacket for a press event, even though it’s the middle of winter in New York? Will comebacks ever be allowed by the public again, or must every star over 40 have remained consistently in the public eye, so that their aging process comes little by little rather than all at once?

When Renée Zellweger came under fire for her perceived changes, she told People, “I’m glad folks think I look different! I’m living a different, happy, more fulfilling life, and I’m thrilled that perhaps it shows.” Zellweger’s response points to the subversive notion that a beautiful woman can mature and evolve. Zellweger was not upset that people thought she looked different because she truly felt good about her appearance. This, too, upends our cultural myths about beauty because instead of seeking power from external praise and acceptance, Zellweger is simply assuming power from within, without the need of any approval from her audience.

So how should we talk about the way women look?

The way women look is undeniably powerful, and when a women chooses to change her look, it’s natural that we pay attention. Media coverage of these changes, unfortunately, is often salty and laced with venom. Particularly when directed at starlets who’ve been lauded for their “natural” beauty. It’s understandable then that the Gloss would urge us not to bully the stars, and that Elizabeth Gilbert would take to Twitter to remind us to “be kind.” But when we approach Thurman’s and Zellweger’s stories this way, we risk casting them as victims.

Alternately, we can take interest in how they look and celebrate their choices. We can’t all be Beyoncé, but it would be nice if all celebrities, and all women, could get the Beyoncé treatment. When Beyoncé released her self-titled video album last winter, much of the excitement and thrill of the release came with seeing Beyoncé transform from video to video. We adore her vitality, her energy, and her personality, but we’re also excited to see all the things she can be as she morphs from one look to the next.

It’s natural to be intrigued when a star makes a change or opts for a new style, but when we ask a woman to adhere to her former look, or cast her as a “type” we limit her autonomy. So if we’re going to talk about women and beauty let’s be clear. Beauty is a choice, and the choice belongs to the women wielding it.

Photo via eliasportfolio/Flickr (CC BY 2.0)