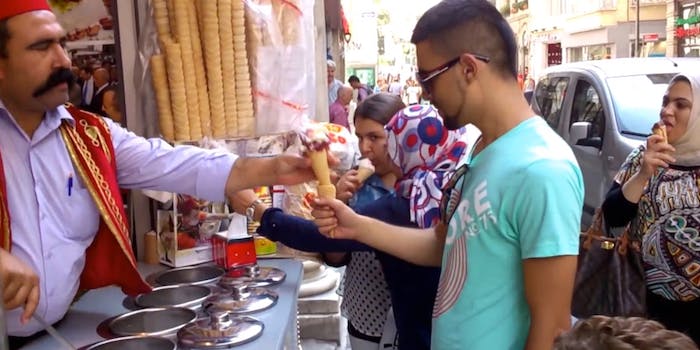 This Turkish ice cream salesman makes you work for your dessert

Now you see it, now you don't.

This ice cream salesman is a master troll.

Located somewhere in Turkey, he turns what could be a dull job and makes it a show to see. He can expertly scoop ice cream with his spoon, place a cone in your pants, top it, and hand it back to you without even trying.

And then he takes a leaf out of Lucy van Pelt’s book. Or rather, several chapters of it.

It makes the ingredient mixing you’ll find at a place like Cold Stone Creamery pale by comparison, and after the third fakeout, it’s a wonder he still falls for the salesman’s tricks.

But, like Charlie Brown with that football, he presses on. After all, he just has to get that ice cream cone one of these times.