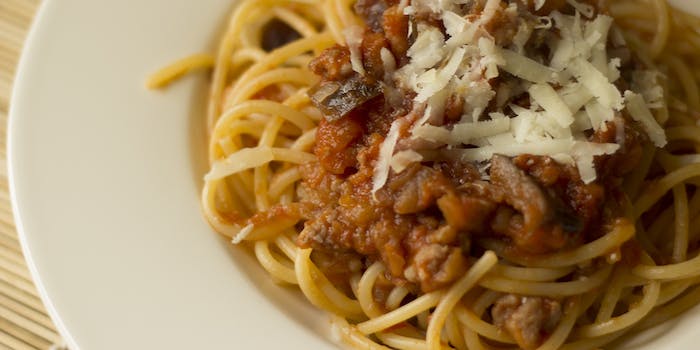 A condom filled with spaghetti is going viral on Tumblr

Tracing this mind-bogglingly weird, inexplicably hilarious photo of a condom stuffed with spaghetti, lying on a bed.

A theory: There’s a direct relationship between a Tumblr post’s popularity and its lack of context. Case in point: the mind-bogglingly weird, inexplicably hilarious photo of a condom stuffed with spaghetti, lying on a bed. 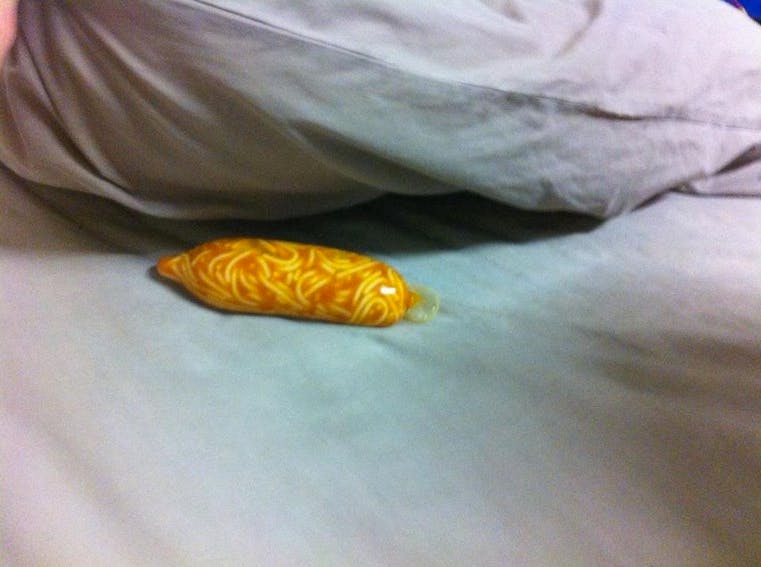 It’s flying around the Yahoo-owned network with (virtually) no backstory whatsoever. That’s about par for the course, though. In August, the same thing happened to an even more bizarre clip of a man having sex with a snake. But the condom—how? Why? Who? Is it some Pastafarian totem? That 4chan meme about spaghetti in the pockets translated into real life? Just a meal sealed tightly for a midnight pasta snack? Many Tumblr users have no idea. 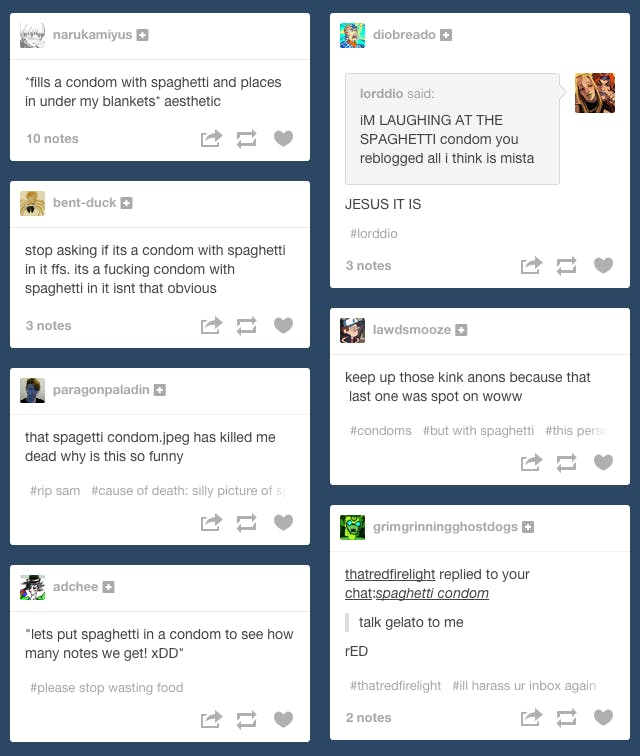 Lack of context often turns Tumblr into a blank slate onto which users can project their spaghetti-condom fantasies and create weird image macros. But this image, referring to someone’s dad leaving the condom under a school-aged kid’s pillow, hints at a much deeper, darker undercurrent of Tumblr from which the spaghetti condom was unearthed (and unwrapped, stretched, filled, and posted):

How does one even fill a condom with spaghetti? pic.twitter.com/h0hlCD7w0i

There may be a loose connection between the spaghetti condom and a roleplaying community on Tumblr devoted to dad-daughter relationships. It’s called “daddy dom,” or “ddlg” for “daddy’s little girl,” or “daddy dom/little girl” in written erotica. It features a lot of disturbingly cutesy stories about incestuous relationships and child abuse. (Baby roleplaying is arguably one of the worst things on the Internet.)

A spin-off meme called “cummies” (warning: NSFW) is the slang term for an orgasm. The “cummies” thing is making the rounds because of daddy roleplay on Tumblr. French toast is involved, somehow.

There’s also “gummies,” as in gummy bears filled with semen, a sub-meme that pops up on 4chan’s My Little Pony forum.

Unrelated to the ddlg roleplay, there’s a safe-for-work but equally bizarre assortment of photos of random things filled with spaghetti, compiled in this BuzzFeed story.

The spaghetti condom, then, represents all of the above. And also nothing at all.

Update 4pm ET, Oct. 20: Ryan Broderick of BuzzFeed argues that the spaghetti condom is a riff on the “When U Mom Com Home and Make hte Spagheti [sic]” meme, and thus doesn’t have much of a connection to cummies and ddlg roleplay—“but the Internet is weird,” he says, “so who knows.”