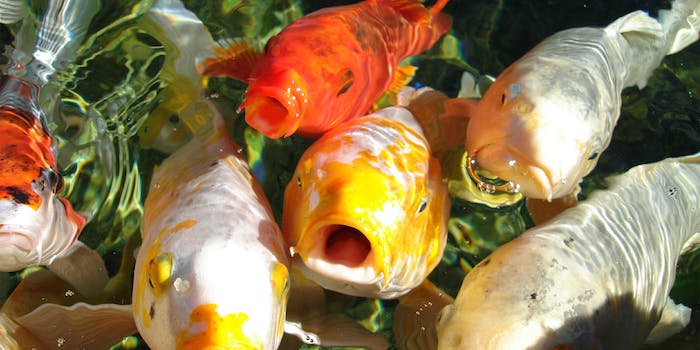 Wait until you see the full video.

Raise your hand if you had “feeding koi fish” in your “what will President Donald Trump do to spark an international incident on his 12-day Asia trip” pool. You’ve won yourself quite a prize.

Trump is in Japan as part of a major swing through Asia, and he joined Japanese Prime Minister Shinzo Abe at the Akasaka Palace, where they fed some of the koi at a pond on the grounds.

Some reporters jumped on the tweet, speculating the president had acted out of turn, and the news quickly went viral.

Trump spoon feeds koi fish at Akasaka Palace. He ended up just dumping the whole box of fish food into the pond, per @justinsink at scene. pic.twitter.com/ICAxXMlMsA

Because Trump is known for his somewhat lackadaisical behavior, social media jumped on the photo, assuming he had shown disrespect to both the koi fish and Abe.

However, if you want the full video of the experience, it looks like Trump was merely following the lead of Abe, who also tossed his whole box in, albeit with a little more grace and panache.

So, sorry to disappoint. It appears that this is not the international incident it was originally hyped to be.

But Trump is heading to South Korea next. Who knows what will happen there?