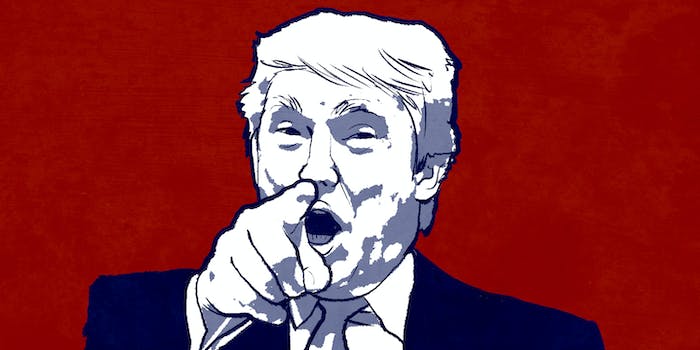 No, Donald Trump isn't a terrorist, but he has something in common with ISIS.

Yes, Trump, who was approaching 6.7 million Twitter followers on Wednesday, uses the social media platform effectively. He communicates directly with supporters, bypassing the mainstream media he maligns, and often gets traffic-hungry publications to cover his tweets anyway.

By tweeting in what at least seems to be his own voice, constantly and controversially, Trump has made his Twitter feed, like his rallies, an original and idiosyncratic spectacle. It is hard to ignore.

His authentic sounding tweets reinforce his claim to be an unfiltered truth teller, in part because his rivals’ feeds sound like campaign aides dribbling out focus-group tested press release lines. Trump has exhibited a knack for insults too. His best attacks, while crude, have a whiff of accuracy that can make them stick.

But as with the rest of Trump’s act, his social media success feels like a bubble bound to burst. Here’s why.

It is trendy to say Trump, like the Islamic State, is better than rivals at social media.

ISIS gets attention online through volume and shock. But as much as it is asserted, there is little evidence that the group’s online activity has lured recruits who wouldn’t go anyway, as young jihadists went to Afghanistan in the pre-Internet 1980s. Meanwhile, the group’s postings anger a vastly larger population of watchers, drawing other countries into the coalition against the group.

“The vast majority of people in the world are repulsed, not attracted to pictures of beheadings and other atrocities,” says Max Abrahms, a assistant professor of political science at Northeastern University.

In a recent study by George Washington University’s project on extremism, authors J.M. Berger and Heather Perez found that ISIS is losing ground on Twitter.

Trump is no terrorist. But he has a similar problem. To pump up this angry fans, he uses claims and language that alienate a bigger audience. For every angry #MakeAmericaGreatAgain retweeter there are more people put off by Mussolini quotes and links to crackpot constitutional claims.

Trump’s unfavorable-to-favorable ranking is already approaching 2-1, polls show. His tweet storms referencing “little Marco Rubio” may delight his fans, but they also remind opponents why they don’t like Trump.

Trump’s reputation for being an effective insulter relies not on wit but a penchant for repeating insults to millions of people who in turn repeat them. And, the best thing he had going—humor—has disappeared from his tweets as he grows shriller and more defensive.

Trump scored big when he labeled Jeb Bush “low energy.” It seemed to accurately describe something lacking in the former Florida governor, so much so that reporters found voters repeating the description.

Shouldn’t George Will have to give a disclaimer every time he is on Fox that his wife works for Scott Walker?

That was a good point.

On July 12, Trump said former George W. Bush aide Karl Rove, who predicted a Mitt Romney election win and insisted the Massachusetts governor had won Ohio after it given the election to President Barack Obama, “made fool of himself in ’12.” It’s hard to deny that.

But Trump has more often relied on potshots shorter on sting than defensiveness. After Rubio battered Trump in a debate last week, the real estate developer for days referred to “little Marco Rubio” and “lightweight” Marco Rubio on Twitter.

Little Marco Rubio, the lightweight no show Senator from Florida is just another Washington politician. pic.twitter.com/NsLrHrqjdx

Trump sounded like he was still smarting, not winning. His haste to hit back led to more embarrassment, when the candidate who brags about his Ivy League degree misspelled “honor” and “choker” in attacks on Rubio.

“It’s a very good quote; it’s a very interesting quote, and I know it. I saw it. And I know who said it. But what difference does it make whether it’s Mussolini or somebody else? It’s certainly a very interesting quote. That’s probably why I have between Facebook and Twitter 14 million people when other people don’t,” he told NBC’s Meet the Press.

A few weeks ago, he reweeted to his millions of followers a video posted by a supporter who had just a handful of followers at the time of tweet. The video showed an unidentified woman incorrectly arguing Rubio, who was born in Miami, is not eligible to run for president.

Asked in a interview why he shared the video, Trump said he had never “looked at” the question of Rubio’s eligibility.

“Somebody said he’s not,” Trump said. “And I retweeted it.

That is not the explanation of a candidate executing a masterful strategy. Like ISIS, Trump has used Twitter well so far, but his advantage is not skill, but reckless disregard. Teenagers who drive 80 mph on side streets get places faster. But eventually they crash.