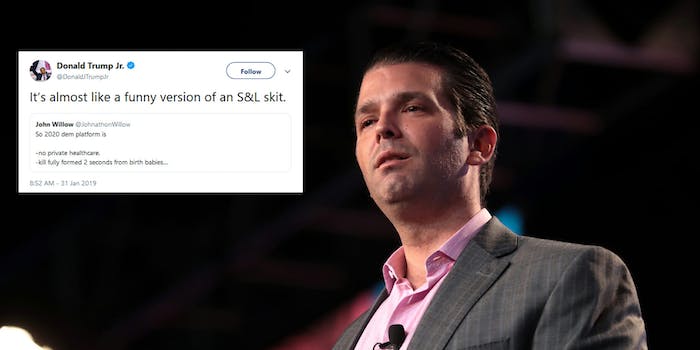 Donald Trump Jr., the son of President Donald Trump, tried to mock Saturday Night Live on Thursday by comparing criticism of 2020 Democrats to a “funny version of an S&L skit.”

The president’s son quote retweeted someone who claimed the 2020 platform of many Democrats was “basically a right wing parody of a dem platform and it’s real.”

In response, Trump Jr. said the list was “almost like a funny version of an S&L skit.”

However, as many people quickly pointed out–”S&L” (as Trump Jr. wrote) would be an abbreviation for “Saturday and Live.”

The correct abbreviation, “SNL,” is for “Saturday Night Live.”

Lol Saturday and Live is my favorite show https://t.co/op2RVgTCOb

In case you were wondering, this is what "Really dumb" looks like.

"Live! From New York! It's Saturday And!" https://t.co/fOEVZsasqD

don jr thinks the "N" in SNL stands for "and" pic.twitter.com/KzkL6clQdC

I'm not a fan of the recent Saturday And Live seasons. Give me Farley or give me nothing. https://t.co/9lK4ZsAF2I

Of course, it’s not shocking that Trump Jr. may not think Saturday Night Live is funny, considering the views his father has about it. The president has repeatedly railed against Alec Baldwin’s impression of him as “terrible” and aired his opinions about the show online.