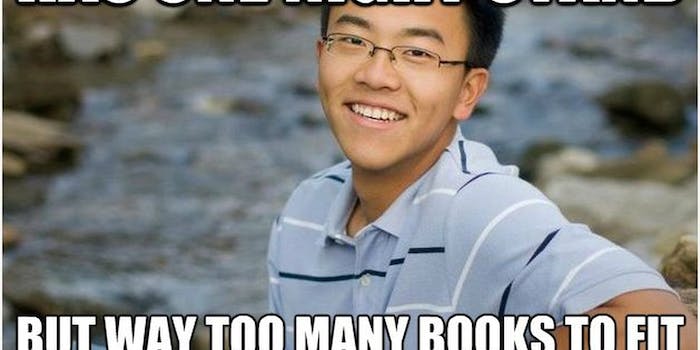 Should anyone be upset that a new meme portrays Asians as studious? Actually, yes.

Does the Internet hate Asians, and if so, why?

On Tuesday, an image macro called “Troubled Rebellious Asian” made the rounds on Reddit and other social networks. The top caption reads: “HAS ONE NIGHT STAND.” Then you see a young, smiling Asian man sitting as if posed for a high-school yearbook portrait.

At the bottom, it reads: “BUT WAY TOO MANY BOOKS TO FIT ON IT.”

Get it? You see, Asians are so obsessed with getting their smart on that they couldn’t possibly be capable of having a “just-for-laughs” sexual encounter like those rascally non-Asians. To them, a nightstand is just a place to put their books.

Yes, explaining a joke is like dissecting a frog—if you can call this humor.

“Troubled Rebellious Asian” is the latest in a long list of memes based on Asian stereotypes: There’s also Disappointed Asian Father, Difficulty: Asian, and, of course, Shit Asian Girls Say.

While Reddit upvotes and downvotes aren’t a perfect barometer—the site obfuscates the real figures to fend off spammers—as of this writing, “Troubled Rebellious Asian” has 9,238 upvotes and 6,615 downvotes on Reddit, an unusually contested tally. That’s not surprising, though, given Reddit’s repeated wrestling with racism on the social news site. (Reddit, to be fair, is far better than some cesspools of racist bile like 4chan.)

There are a couple possible explanations for the reaction to “Troubled Rebellious Asian.” The more innocent one is that the image’s punning is admittedly pretty clever, regardless of the joke’s target.

As one redditor put it, “My sensibilities about race perception were offset by my love for clever wordplay.”

An alternate explanation is that the casual racism is tolerated because it’s based on what’s sometimes referred to as a “positive” stereotype. Intelligence is a virtue, so some see little harm in broadly generalizing Asians as such. But redditor charcharrones pointed out the flaw in this theory:

Personally I don’t care much, but what I don’t understand is how everyone keeps complaining that it shouldn’t be offensive and doesn’t seem to realize the full implications of this picture.

“Let’s start here.. you think this is just about being smart/a nerd. No. Not really. It really implies that Asians would never get any—hence this use of ‘one night stand’ versus the standard usage. That’s what is bothering people.”

Rosalind S. Chou, a sociologist who cowrote The Myth of the Model Minority: Asian Americans Facing Racism, echoed this sentiment in an email to the Daiy Dot:

The ‘positive’ stereotyping, especially for Asian American men, is a double-edged sword. While they aren’t being constructed as ‘dangerous’ or ‘sexual predators’ like other men of color, they are largely stripped on manhood in the media and in these internet memes.

The Internet’s acceptance of Asian stereotyping has its limits. Last March, a UCLA student’s hateful YouTube tirade against Asians ignited an Internet firestorm that led to the student dropping out of school.

But Phil Yu, who blogs as Angry Asian Man, wrote that the less overt examples of racism are rarely called out:

I’ve found that unless it’s blatant, outright hate speech, people are generally unwilling to label something racist and simply chalk it up as all in good fun for an online community. And the one user who tries to call it out as a harmful stereotype gets pounced on and belittled for trying to spoil the ‘fun.’

Chou added that, while the Internet certainly makes it easier for racists to operate anonymously, acceptance of Asian stereotypes extends far beyond the boundaries of the Web.

I think communities in general are more apt to perpetuate Asian stereotypes because there is no largely visible threat of community resistance … The threat of an Asian backlash, whether it be a product boycott or a march, is just not viewed as damaging a African American backlash led by the likes of Jesse Jackson or Al Sharpton.

The takeaway here is that stereotyping, even when it’s perceived as “positive,” is never constructive, Chou said.

Some (Asians) have said that they have it ‘better’ than other racial minorities and might as well not ‘rock the boat’ or complain. Being seen as a stereotype that may have some positive connotations is better than being seen as culturally or biologically inferior or deficient. In that way, some of them accept a racial middle position in the hierarchy. Yet, they still don’t get to construct their own identities. Some do, some resist, but many do not.

Whether you’re Annoying Facebook Girl or Troubled Rebellious Asian, when you become an image macro, by definition you’re not constructing your own identity. Others are building it for you by layering words on top of your visage.

And, as examples like the UCLA video prove, what starts as well-intentioned fun can easily mutate into outright hate.