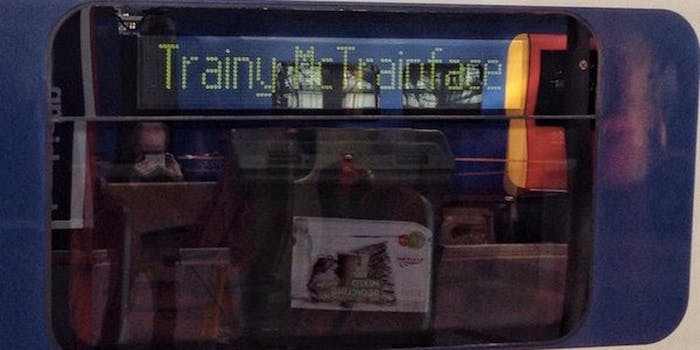 The British people cannot get enough of Meme-y McMemefaces.

Trainy is the work of a cheeky employee at South West Trains, captured in photos as it pulled into Waterloo today:

South West Trains told the Standard that Trainy McTrainface is real, praising the guard who named it for bringing a smile to commuters’ faces.

And while Trainy is a one-day-only affair, I suspect we haven’t heard the end of Thingy McThingfaces coming out of Britain.

“The Boaty McBoatface vote makes me proud to be British,” wrote Nell Frizzell in the Guardian.

“We’ve met with triumph and disaster, and we’ve always made a bum gag just the same. Love it or loathe it, schoolboy humor runs in our blood like Bovril and weak bitter,” she explained.

Although I can only parse half of those extremely British words, it’s confirmed: The U.K. Internet is cheeky as hell and will probably take every opportunity to run this meme into the ground with further McThingies.

Scientists are already joking about naming astronomical objects and species in the same manner, and everyone knows that by the time a meme makes its way to the academic world, that ish is Oldie McOldface.