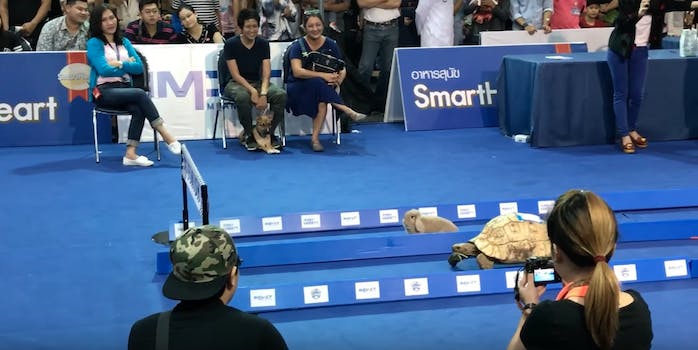 Tortoise and hare face off in real-life race, and guess who wins?

Will slow and steady actually win the race?

The Tortoise and the Hare is one of the best known of Aesop’s Fables. In it, a hardworking and determined tortoise is able to beat a fast but lazy hare in a footrace. It might just be the world’s first big sports upset. There are now an untold number of versions in who knows how many different languages.

Who, yes, for you purist, is a turtle, not a tortoise. For that matter, a hare and a rabbit aren’t technically the same thing either. Hares tend to be much stronger and faster than your average rabbit.

Maybe that’s why people almost never chose an actual hare when staging real-life versions of these races. They want to give the tortoise a fighting chance. Besides a hare is more likely to jump right over their puny barriers and never be seen again.

The question came up after this year-old race went viral on Twitter this week.

It seems to follow Aesop’s tale almost exactly, with the rabbit taking an early lead, then putzing around while the tortoise slowly but surely plods over the finish line.

In fact, that’s the way these races always tend to go.

It seems Aesop’s tale might have been more than just a metaphor.