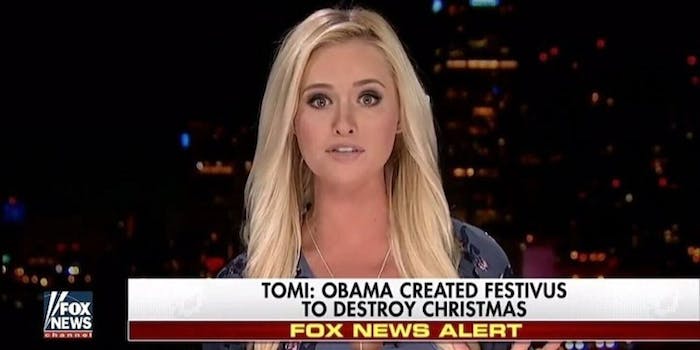 'You idiots think this is real?'

It can’t be fun to be the subject of a fake meme where an image of you saying something you never said (though many people believe you certainly could have said it) is circulated throughout social media. Not only is Tomi Lahren not having fun with a meme of her saying something ridiculous on Fox News, she is PISSED about it.

Christmas is cancelled. Thanks Obama pic.twitter.com/vD7gJoAPgg

The chyron of Lahren blaming Barack Obama for the Seinfeld-invented holiday of Festivus was quickly revealed as a fake, though.

no, it is not real. stop asking. pic.twitter.com/cAcST46N8r

Unfortunately for Lahren, the fake meme exploded across the internet, making her look silly. Understandably, she was upset and lashed out on Twitter.

You idiots think this is real? Have you nothing better to do than photoshop fake news? Get a hobby. Go for a walk. Do something. Good Lord. https://t.co/tAVh7Vy3n0

Hello there, do you realize you are circulating fake news? Not very professional Dr. Allen but by all means please tell me how stupid you think I am… https://t.co/qlg4RzTEFP

Does it not bother you to circulate a photoshopped piece of FAKE NEWS? Classy. https://t.co/hvwdgwPkd2

The internet, though, was less than apologetic about the mistake, especially because Lahren stirred up the internet on Thanksgiving with a Photoshopped image of Colin Kaepernick kneeling on D-Day with a tweet that read, “Food for thought.”