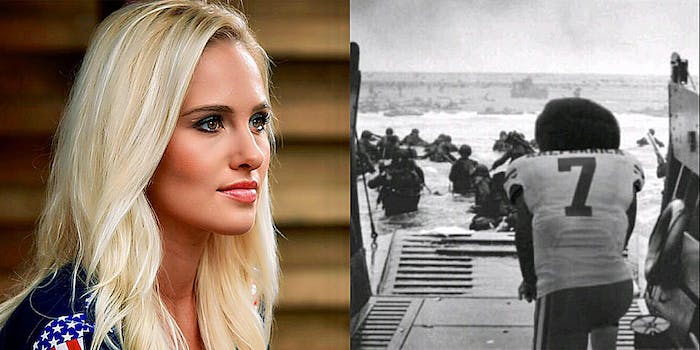 Tomi Lahren is the aunt you avoid at Thanksgiving.

Tomi Lahren isn’t really good at holidays and Thanksgiving was no different.

The Fox News commentator tweeted a photo on Thursday of a kneeling Colin Kaepernick, who was just named GQ‘s Citizen of the Year, digitally inserted into a photo of D-Day, with the caption “Food for thought.”

Sure, it’s a head-scratcher but what Lahren excels at is reactions and they popped up faster than accusations of citizenship fraud.

This does not qualify as an actual thought

You disrespect the memory of those who fought and died that day by using this image to make your petty and mistaken political point.

.@TomiLahren, please remind us in which branch of the military you served. Can’t seem to find any record of your distinguished career in uniform.
PS: Are you still on your parents’ health insurance? #ThanksObama https://t.co/iG3DimrMB3

I think you know by now the NFL protests have nothing whatsoever to do with the military. Why do you insist on pretending they do?

And your service to America has been exactly what? Whining?

Lahren has used Kaepernick’s protests as fodder for her “final thoughts,” eloquently calling one of his statements about kneeling during the anthem “mouth diarrhea.” So don’t forget to cue up the remix this holiday season.