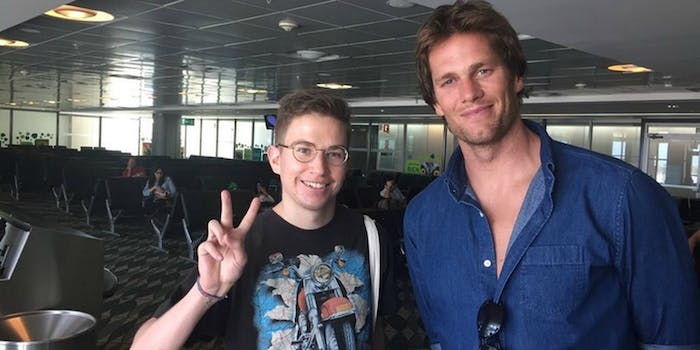 It didn't matter if he was kidding or not.

Here’s a lesson that all-non Patriots fans should have learned by now: You criticize star quarterback Tom Brady at your own risk.

Even if you’re only kidding around, if you say something disparaging about one of the best quarterbacks of all time, the New England fans will find you on Twitter. And they will (metaphorically) disembowel you.

As Ian Servantes, the pop culture news editor for Complex magazine, discovered on the way home from a vacation in Costa Rica—when Servantes, who counts himself as an Eagles fan, happened to be in line at the airport and discovered an attractive woman in the same vicinity. That’s when this story—and the trouble—begins.

Oh, Ian, don’t you know the Patriots fans will seethe and gnash their teeth when they discover that you’ve called their hero a “fuckboi.” Just don’t tweet anymore about Brady, and you might not get verbally abused. And whatever you do, don’t take a picture.

Update: I got a photo with her fuckboi husband lmao pic.twitter.com/cEBf8uYunB

I hate to admit it, but he was mad nice, and Gisele is the only one who gave me a hard time about being an eagles fan

And that’s when the river of vitriol went from a trickle to a flood. Here’s a small sampling.

@ian_servantes only makes you look even more unattractive. you're a brave boy for posting

@ian_servantes LOL you look like that and you're calling other people fuccbois? Holy fuck, what does that make you then?

@ian_servantes @Eagles Open wide, Brother. Because it's going in…

As a reminder, here are the only people who are allowed to discuss Brady online.

1) If you’re running for president and/or producing a plethora of ball caps.

2) If you mention him in your obituary.

3) If you sketch him while both of you sit in a courtroom.

Otherwise, nope. Don’t say you were checking out Giselle. Just avert your eyes and hope Brady and his fans don’t come looking for you.