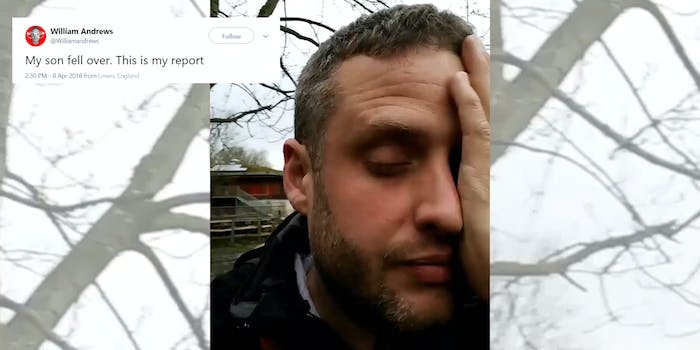 Toddlers spend most of the day falling over. It’s pretty much their job until they learn to walk. The odd thing is, their reactions to toppling over can be anything from popping right back up to screaming as if they were dying.

British comedian William Andrews had to deal with the second example recently when his son fell over and totally lost it. To be fair, the four-year-old did fall into some stinging nettles, and who among us wouldn’t be upset by that?

It could have just been a sad story, but Andrews’ retelling of the event elevates it to the level of dramatic hight art. It’s just what we all need while we wait for Game of Thrones to come back.

My son fell over. This is my report pic.twitter.com/Jk7aU3v987

"I may never stop saying ow" this is amazing.

There was even more than one Shakespeare comparison

as riveting as any #Shakespeare soliloquy. can we presume all ended well?

Although Andrews felt that might be a bit of a stretch.

For those of you saying my son should be the next poet laureate, have a look at this dinosaur he made. Im just saying, you can't be great at everything. #feetontheground pic.twitter.com/Xell27tqjf

A lot of people also took the opportunity to share their own stories about childhood drama and/or nettles encounters.

When he was 8 my partner crashed his bike into a nettle bush in shorts and t shirt. He was taken home and put to bed. A wasp flew in the window and stung him on the face….

My daughter had her front tooth knocked out by a class mate holding a bat, when she was 6. She later said to me that she screamed so loud that the planets could hear her! Pure poetry!

Andrews seems to be something of an expert at blending drama and comedy. Check out this video of him explaining how to act with glasses.

Or “How to make a fu*k*n pipe bed” which, although not exactly dramatic, is super… helpful?

Andrews is, of course, doing his best to capitalize on his new found fame. Surely his follow-up tweet will be the one that lands him on Ellen.

That last tweet had some legs. I wonder if this tweet of a nice lamp that I'm sat beside can do the same? Unlikely. pic.twitter.com/pWQY5Mzjgp

If not he can just start pushing his son into bushes and hoping for the best.