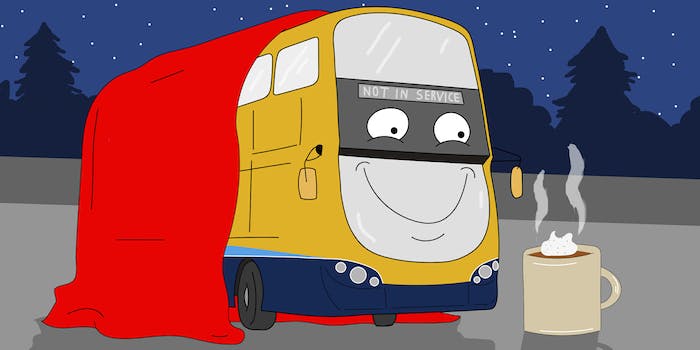 Sure it was all a lie, but at least we learned something?

It all seems innocent and adorable. Matthew Mulligan, of London, tweeted at the Dublin bus service, saying his three-year-old wanted to know how they choose which buses get to sleep inside at night and which have to stay out in the cold.

And it only got cuter when the bus service chose to answer in classic Yes-Virgina-there-is-a-Santa-Claus style.

Hi Matthew, we have rang around to a few of the depots and we can confirm that all buses are loved equally and take turns sleeping inside the warm depot. Those sleeping outside are given cocoa to keep warm.

Obviously, this gave people warm cocoa-type feelings in their hearts.

A screen capture of the tweets even garnered an impressive 11,000 retweets and over 30,000 likes.

I needed this so much today pic.twitter.com/SFRhIVne3W

For the most part, people were like “Meh, whatever,” but a few were unhappy that they had been fooled.

It really all comes down to your perspective. Sure we were all tricked into believing in a cute story about a little kid who’s too dumb to know vehicles don’t feel cold, but on the upside at least we now know where the buses sleep at night.

He was cold tonight so came in to get some hot coco and some sleep pic.twitter.com/VkGhPQxjNm